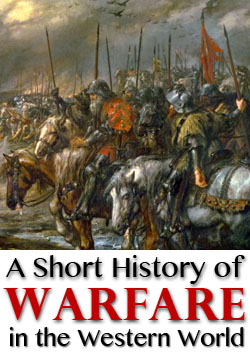 “Morning of the Battle of Agincourt”, painted by Sir John Gilbert.

Jerry Quinn is a classical actor and history buff with a special interest in 10th-12th century Normandy. He’s spent a dozen years performing at Renaissance Faire, where he’s learned both how to pick up a prostitute in Shakespearean English and when it’s okay to let go of obsessive historical accuracy for the sake of making sense to the audience.

He’s also the editorial administrator of the Ubergroup on scribophile.com, the “most productive writer’s group on the internet,” where he herds a little over 150 cats writers and preaches the dramatic principles of Lajos Egri.

A Comedically Short History Of Warfare In The Western World

Fantasy authors often buck the idea that technology in their world should progress the same way real history did. Technological advances in warfare, however, are a lot like biological evolution: the result of trying and failing a whole lot of times before something actually works. Tiny fencing swords were not used against knights in plate armour because, plain and simple, they wouldn’t have worked. If you don’t believe me, take the most delicate fish knife in your kitchen and attempt to hack open a corrugated-steel loading-dock door.

Sure, a tiny fencing sword could have been made by the same level of forging technology as a heavy broadsword, and yes, some early ones did exist. They weren’t widely useful, however—outside of duelling with another unarmed layman—so they weren’t made in quantity for the battlefield. Why waste the time and money making a tool that doesn’t work? Nature and economics both refuse to support illogical solutions. Not until the proliferation of efficient firearms made heavy armour obsolete (By the same force of necessity: why weigh yourself down with something that won’t actually protect you anymore?) was it realistic to try to poke your opponent with something fast and light.

Over the next few months, I’ll be trying to help fantasy authors understand the underlying logic of why certain things came after others in actual history. Yes, fantasy by definition means you can do whatever you want, but if “whatever you want” happens to include the physics, chemistry, and biology of Earth–-if your fantasy world has 9.8 m/s/s gravity, a 24-hour diurnal cycle, four temperate seasons, liquid water, mercury that’s poisonous, gold that’s valuable, and a whole bunch of recognisable four-limbed megafauna like horses, cows, and sheep—you need to understand the basic relationship between the limitations of that world and what the bipedal primates running around on it can do with it.

Since a large portion of fantasy takes place in an analogue of the western world sometime in the last 2000 years, today we’ll begin with an overview of that, starting with: 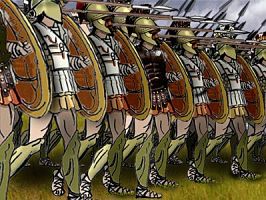 The very early Roman Republic—from about the 7th-4th century BCE—followed the example of a Greek phalanx: primarily infantry, long spears, interlocking shields. In the 3rd century BCE, they really started getting organised: mobile, disciplined, and constantly rotating to allow fresh troops into battle. Weapons and armour were quite light. The main advantage was manoeuvrability, good funding, and discipline that came with soldiering as a full-time profession. The Roman army built roads to get where they were going easily. They managed food and supplies carefully. From the 1st century BCE onwards, Roman armies even brought along doctors and staged field hospitals.

The keywords of Roman-era infantry combat: light, fast, organised, aggressive. They took what everyone already knew how to do and did it bigger, faster, harder.

Smarter politics and copying your neighbours

Rome had always assimilated conquered ‘barbarian’ peoples into its army, but as the empire over-expanded, over-spent, and grew corrupt, administrative and support structure declined. The fiction that the chaotic, unrelated tribal mercenaries were paid Roman allies continued into the 5th century, but in reality, the organisation that had made Rome was long gone.

After the collapse of Rome, Byzantium continued to use fundamentally Roman structure, but were clever enough to improve upon it.  Rather than allowing citizens to avoid military service — which required hiring mercenaries of questionable quality and loyalty — they implemented universal conscription. The Byzantines were also quick to adapt clever innovations by their enemies—notably, the concept of heavy cavalry in the form of cataphracts of the Eurasian steppe.

The keywords of Byzantine-era combat: politically savvy, opportunistic, adaptable. They took Roman organisation and added the humility and pragmatism to incorporate whatever they saw that worked. 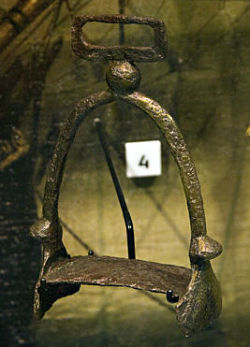 There’s a theory that feudalism in Europe was a result of the introduction of the stirrup. Stirrups enabled “shock tactics”—ie, a fighter with a way to brace himself on his horse could hang on well enough to mow the enemy down. This tactic was so superior, Carolingian France in the 8th and 9th century structured itself around infeudination: rewarding its best mounted warriors with land. Those lords would then turn around and subinfeudinate –- think “sublease,” except the property is paid for with military service — lesser knights with smaller parcels of their land. (This is why, by the way, we still call the people we rent our apartments from “landlords” today.)

Although the causality is debated, it is undeniable that heavy cavalry and feudalism rose to prominence at the same time. Modern gangs are still structured similarly: a charismatic and physically dominant leader both charms and kills his way into power, personally appointing those he favours (who must have similar but not greater personal charisma and physical dominance) as his lieutenants, and so on down from there.

The keywords of medieval-era combat: heavy, aggressive, direct. Fundamentally, medieval society functioned on the premise that those who could take something, did. 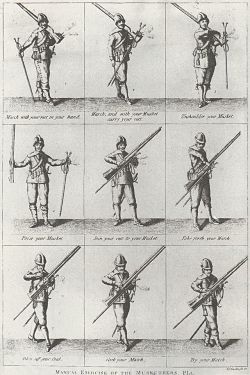 The earliest known gun appeared in Europe in the 14th century, and artillery became indispensable by the 15th. Fortification designs rapidly began advancing to keep pace, and the importance of nobility in warfare eroded as heavy cavalry lost its advantage. Longbows and pikes, used intelligently, could be very effective against armoured knights, but both required a lifetime of training that made it difficult to amass large forces. As technology improved, “hand cannons” became prominent among infantry. The flintlock musket of the 17th century could kill an armoured man at 100 yards and did not require great physical strength to use. They weren’t particularly accurate, but in enough quantity, they didn’t need to be. By the end of the 17th century, mobility was preferable over the nominal remaining protection of armour, and thus the armour disappeared.

It’s been said that “The musket made the infantryman and the infantryman made the democrat.” The fact that anyone could use a musket made the common man relevant in combat, swelled the size of armies, bred nationalism (drawing men from across the country together to serve in organised corps) and made it feasible for a peasant revolt to have military effects.

The American 2nd amendment–written in the 18th century, within 100 years of muskets rising to prominence–is grounded in the idea that the muskets widely owned by common men are of adequate technological consequence to overthrow a monarchist government.