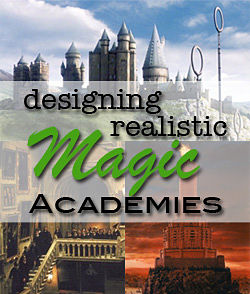 This week’s expert is our first returning guest! Hannah Emery is a sociologist by training (PhD from UC Berkeley last year). Her guest post on developing fantasy cultures remains of the most popular articles in this series. Her professional specialties include culture, education, and identity; she wrote her dissertation on the social construction of identity, looking at how parents choose names for their children. She’s taught courses on sociology, identity, and family.

When I reread JK Rowling’s Harry Potter books these days, I have different questions than I did the first time around. Questions like: who are the great legendary heroes of British wizarding society that every kid learns about? What options does a talented student like Hermione Granger have for post-secondary education?

Anyone who’s read or watched the Harry Potter saga knows quite a bit about Hogwarts. But even after reading all seven books, I’m still pretty confused about the education of 20th-century British wizards. And if you’re planning to create a school of magic for your fantasy world, there are some things you should think about to keep your readers from having this same confusion. Most importantly, you need to figure out the function of your school within its society. Ask yourself this question: who is your school’s target audience?

At first glance, schools of magic would seem to be pretty common in fantasy fiction. Besides Rowling’s Hogwarts, there’s the Citadel in George RR Martin’s A Song of Ice and Fire, the University in Patrick Rothfuss’s Kingkiller Chronicles, and loads of others. However, most institutions of magical learning seem to operate on the trade school model: students are a slice of the general population, of various ages and backgrounds, who’ve come in search of highly specialized knowledge or training.

Hogwarts, on the other hand, is a general education program: all British witches and wizards between the ages of 11 and 17 are expected to pass through its doors. Like general schools in most parts of the world, it divides its students primarily by age, and students have relatively little choice in which courses they take for most of their academic career. Hogwarts students aren’t there to get a cosmetology certificate or a law degree: they’re just trying to graduate from high school.

The Prevalence of Formal Education

Although human societies have always had to train their children in how to be productive adults, and formal instruction for some elite portion of the population (on topics including literacy, mathematics, philosophy, theology, and science) has existed in almost every society throughout history, widespread education of “the masses” is a relatively new concept.

Laws requiring formal schooling for all children regardless of their background first appeared in parts of Protestant Europe in the 17th and 18th centuries; compulsory schooling didn’t become the general law in the United States until 1918 (though many states mandated it decades earlier).

Let’s say your story is set in a version of our modern real world. There’s almost certainly some sort of mandatory, formal education for children. At least through the mid-teenage years. So you’ve got a school system designed to serve the general population. Your next task is to think a bit about the people who designed the system, and figure out their goals.

A quick look at the history of the modern Western educational system shows that the people putting together public schools have had different goals at different times, and these goals have all affected our complicated modern system.

Scholars of education pretty much agree that in the 21st century, the general Western education system has a few main purposes:

Although there are a lot of debates these days about what schools ought to be teaching students – how human sexuality should be discussed in school (or if it should be discussed at all), whether programming courses should be mandatory, whether teachers should make sure every high school graduate can balance a checkbook and change the oil in their car – there are a few skills the modern world takes for granted.

If you’re an adult living in an industrialized country, it’s expected that you can read, write, and do basic math. That’s one reason standardized tests focus on these skills: someone who’s illiterate or innumerate will have a really hard time in the modern world.

The first public schools in Protestant Europe came about because religious leader Martin Luther thought it was important for all citizens to be able to read the Bible. In the United States, widespread public schooling became popular during the massive immigration of the 19th century, and one of its main goals was to teach immigrant children how to be Americans. The Pledge of Allegiance was developed with this goal in mind; ditto the story many American children still learn about President George Washington chopping down a cherry tree as a boy.

Although many modern schools try to take a more multicultural approach they tend to teach children about their own nation’s geography, civics, and history. Public schools put a country’s entire next generation in a room together to learn about the world. It’s unavoidable that part of that learning will involve establishing some basic norms about what it means to be American/Australian/Japanese/a British wizard.

If you grew up in the United States, there are certain books you probably read in high school: The Grapes of Wrath, Catcher in the Rye, To Kill a Mockingbird. If you grew up in the English-speaking world, you probably have at least a passing acquaintance with Romeo & Juliet and Hamlet. The markers of what constitutes “an educated person” are different from one place to another, but education almost always includes more than facts and figures.

Depending on which rank of society you’re planning to move in once you’ve finished your education, the amount of “culture” you’re expected to be familiar with could go beyond literature. You might be expected to speak a foreign language fluently, or to recognize classical music or fine art, or to know which fork to use at a fancy dinner party. Which brings me to the final role of formal education…

As I mentioned, in much of the world throughout much of history, formal education was the domain of an elite few. As education expanded to the masses, that wealthy few began creating additional prestige markers to set themselves apart. For a while, it was only the elite who attended high school; then, it was only the elite who pursued bachelor’s degrees; now – well, you get the idea.

This phenomenon, called credentialism, is one thing sociologists point to as a cause of “degree inflation” (where bachelor’s degrees are increasingly not sufficient education for a professional job). The harder it is to get credentials for a job, the longer that job will stay in the hands of the elite.

With these goals in front of us, we can see that Hogwarts has an odd curriculum for a modern comprehensive school. As far as we can tell from the books, it focuses heavily on the acquisition of practical skills: like Martin’s Citadel and Rothfuss’s University, it feels much more like a trade school than a place for general education.

If your school of magic is a specialized place where people go to learn the wizarding arts, then you can feel free to make the classes as content-focused as you want. But if you’re designing a place for general education, you’ll want to include at least a little of the other stuff. Here are some things to consider:

You don’t have to put it all in; you probably shouldn’t. Like all worldbuilding, a little in the text goes a long way. But thinking about it will help you build a better magic school, and with it, a better world.

If you enjoyed this article, would you mind sharing it on Twitter, Reddit, or your social media platform of choice? Here are three ready-made tweets: