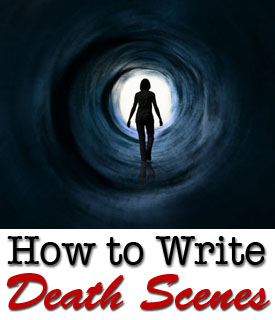 Bianca has written two non-fiction books: The End: The Human Experience of Death, which attempts to answer the question, “what is death like?”, and The Sixth Wave: how to succeed in a resource-limited world. She is also editor of the 2015 Best Australian Science Writing anthology.

She is currently seeking publication for BIOHUNTER, an adult science fiction (solarpunk) novel set in North America some 250 years in the future.

The many faces of Death

There’s a great scene in the 1987 film ‘Outrageous Fortune’, which starred Bette Midler and Shelley Long, where Long’s character is asked to perform a death scene in her acting class.

Her character, desperate to please the acting coach, delivers the most over-blown Baroque impression that drags on and on with its flourishes, gasps and gestures until finally, mercifully, she ‘dies’. She gets utterly roasted by the coach, but gets her revenge later in the film (*spoilers!) when, to save her life, she must convince him that he has succeeded in shooting her.

That death performance is a little different. There are no flourishes, no dramatic gestures. Just *bang*, and she’s down.

Thanks to Hollywood, our ideas of what death looks like are pretty skewed from the reality, either to serene closing-of-the eyes, or a Tarantino-style blood-soaked blaze of glory.

There’s no such thing as a ‘typical’ death, but there are events often reported by those who work in hospitals, hospice care, or other environments.

Cheyne-Stokes respiration is a characteristic breathing pattern that often heralds death, although it is also encountered when sleeping at very high altitudes (which can lead to some unintended alarm on the part of the sleeper’s companions!). The person’s breathing gets deeper – and sometimes faster – but then gets shallower and shallower until it appears to stop altogether …. and then it resumes.

The aptly-named ‘death rattle’ is an unpleasant sound that does not necessarily imply the dying person is in discomfort. It can be rasping, rattling, gurgling, moaning sound that is thought to be the result of saliva in the throat. Generally not a lot can be done about it.

Death often comes as one long, last exhalation, but one thing that many people report is a very sudden change in the skin appearance of the person who’s died; as the circulation stops, the skin very quickly – in a matter of a minute or two – takes on a waxy appearance as blood stops moving through the skin.

There are few things more shocking than having someone who has exhaled their final breath suddenly take a choking gasp, sometimes a minute or two after they have apparently died.

Agonal gasps, as they’re called, sound a lot worse than they actually are (at least for the person who has died). They’re considerably less pleasant for the people sitting by the bedside who have begun to mourn. It doesn’t mean the dead have returned to life – agonal gasps are thought to be a final reflex as the brain seeks one last burst of oxygen, but they are also a very clear sign that death has occurred.

An equally surprising but much more welcome event that can occur just before death is called terminal lucidity, or ‘lightening up’. Many tell stories of people with dementia, Alzheimer’s diseae, or brain tumours: in the final minutes of life, whatever fog has clouded their minds seems to lift. For a brief, shining moment, they are themselves again. They might acknowledge a loved one they have not recognized for years, or crack a joke that gives a glimpse of the person they once were.

However this moment is all too brief, and usually only happens within minutes of death. We still don’t really understand why or how it happens, but for those who experience it, it is a huge gift when they need it most.

Something similar is pre-terminal agitation, where a person who might have been bedridden and barely conscious suddenly finds the strength to get out of bed, walk, dance, or even run.

Perhaps the strangest explainable phenomenon around death is the Lazarus reflex, which is occasionally seen in brain dead individuals in the minutes after they are taken off artificial ventilation. They might lift their arms up in the air, and let them drop crossed over their chest. It’s thought to be a very basic, primal reflex but no amount of explanation could reduce the shock of seeing it.

“There are more things in Heaven and Earth, Horatio, than are dreamt of in your philosophy.” So said Hamlet to Horatio upon encountering the ghost of Hamlet’s father.

As someone coming from a background of science, there were many things I encountered while researching death that seriously challenged my ability to explain. It is possible that all the following phenomena can be attributed to oxygen-deprived brains, happenstance, coincidence or just a desperate search for meaning. Whether that is the only explanation becomes a matter of faith, not science.

Deathbed visitations are one such phenomenon.People sitting with the dying person often report that person having animated, excited conversations with an unseen person in the room who has long since died (usually a spouse, parent, or friend).

Whether these can be explained by science or not is a moot point: for the person experiencing them, they are as real as anything else around them. Interestingly, the type of visitor seems influenced by culture.  In the West, the visitor tends to be a loved one. In countries such as India, it’s more likely to be a deity.

These visitations often have a positive effect on the person who has dying, resulting a change of their attitude and language towards a sense of journeying onward. It’s usually a source of comfort to them, and to those around them.

There are many stories of pets and animals behaving strangely around the moment of death; dogs howling at a distance when their owner dies, birds flocking to the windowsill. Cats in particular have been associated with death.

Oscar the Cat achieved global fame when a report about his ability to pick which nursing home resident was going to die next was published in the New England Journal of Medicine.

Other unexplained phenomena reported at the moment of death include:

Death is an extraordinarily varied moment and from the perspective of a writer, there is much that can be explored through it.