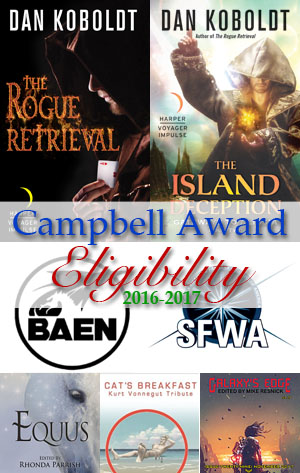 The past two years have been a wild ride. Through a series of what I can only assume are clerical errors and cases of mistaken identity, I’ve managed to publish two novels, four short stories, and several nonfiction pieces. I also became an active member of SFWA and a mentor in a respected pitching contest.

All of those things barely happened. Long bouts of hard work interspersed with brief, shining moments of good luck. Somehow, I’ve slopped my way into becoming a pro writer.

This is how it all came to pass.

The Call Authors Dream About? I Missed It

I remember the day that I got “the call.” My manuscript for The Rogue Retrieval was on submission to several publishers after a long revision period. We’d gotten a nibble from one of them already, in the form of a revise-and-resubmit (R&R). This was back when my plucky optimism had me thinking that an R&R could turn into an offer. I’d about finished those revisions when my phone rang. It was a Friday, mid-morning, and my agent was calling.

However, this was a pre-arranged signal of sorts, so my heart was pounding as I answered. Or tried to, at least. My phone — which had been finicky lately — wouldn’t allow it. So I missed the call. After much cursing and a rebooted phone, I called my agent back, but got no answer. At that point, some doubt began to creep in. Maybe the whole thing was a trick by the mean-spirited gods of telecom.

Then my phone rang again, my agent’s name showed on the screen, and my heart soared. I could hear the excitement in her voice. After months of submission-torture, rejection-torture, and revision-torture, David Pomerico at Harper Voyager was making an offer. And the timetable was fast: he wanted to publish my book in about seven months. In January 2016, as it happened, I became a professionally published author.

My Book Came Out! Then I Lost My Agent

If you think that the world is all cupcakes and rainbows after your debut novel, the next chapter in my story will disabuse you. Shortly after ROGUE was published, my agent and I had a falling out. In retrospect, it was not the end of the world (which is how it felt) but simply the inevitable result of conflicting personalities. She’s a great agent, and I still recommend her to anyone who asks. But she wasn’t the right agent for me.

The timing was a double-edged sword. I’d just finished the manuscript for a sequel, and it was almost time for me to submit it as an option book. I was in touch with my editor, of course, but now I didn’t have an agent to act as the go-between. I polished it up and sent it along. Cue a long period of waiting. It’s even harder without an agent to soothe your nerves.

After a month, I followed up with my editor, who said he hadn’t gotten to it yet but would soon. I offered to send him a synopsis. He said sure, that might be nice. So I sent him a synopsis of the book I’d written, and another one with what I had in mind for book 3.

Cue a fist-pumping celebration! I called my wife to give her the good news. Then I selected a few of my favorite literary agents and sent the e-mail every author dreams of sending. I have an offer and am seeking representation.

That afternoon, one of those agents gave me a call. His name was Paul Stevens, and he’d recently joined the Donald Maass Literary Agency. We clicked right away. I signed with him, and he got to work on the contract. About a year later, HV published my second novel.

In Which I Gain Hyper-Powers

In the course of this, I was also dabbling in short stories. I heard about a story call for an anthology (HYPERPOWERS) to be edited by Bascomb James. The genre was sci-fi space adventure, one of my favorites. I wrote and submitted a story about a military expedition to an apparently lifeless moon. My story made the short list, which was the good news. The bad news was that the small press who’d offered to publish the anthology backed out.

I bit back my disappointment and reached out to Bascomb to see if he was interested in taking the project to another press. I happened to know Juli Rew, the publisher at Third Flatiron. I made the introduction, and then two good things happened. First, HYPERPOWERS got the green light once more. Second, my story was accepted for it.

Later in 2016, I heard that Third Flatiron Publishing was doing a double-stuffed anthology (30 stories) of dark humor inspired by Kurt Vonnegut. Around the same time, I was thinking dark thoughts about the ageism that’s so pervasive in publishing, television, Hollywood, and other corners of our modern culture. I’m tired of the headlines about the amazing 19-year-old who’s a successful author/singer/entrepreneur. Seriously, who gives a crap? Youth isn’t everything.

This bout of old-fogeyism gave me the idea for a story about a dystopian future in which no one is allowed to live past a certain age. I made it 37, because that’s how old I was at the time. The acceptance e-mail for that story still makes me smile. Juli wrote:

We greatly enjoyed the story, with its protagonist who has passed the ripe old age of 37.

You can read “37” in Cat’s Breakfast, which was published this summer.

Interestingly, my short fiction successes sometimes come out of previous failures. Here’s a good example. I’ve always loved Rhonda Parrish’s “Magical Menageries” anthologies, which are themed around mythical creatures. I first discovered them with the Fae (2014). I nearly submitted to Corvidae (2015). I wrote a story for Sirens (2016) that was shortlisted but didn’t get in.

Then I learned that Rhonda’s horse-themed anthology, Equus, would be her last magical menagerie. I love horses, so I wrote a story about wild flying horses that help a girl escape her doomed village. It was fun to write, and a very different kind of story for me. But it was a thrill to get the acceptance from Rhonda, and have my name appear alongside Jane Yolen and other luminaries in the TOC.

Oh, but that’s not my only rejection-to-acceptance experience. A couple of years ago, I heard about an anthology call with a very cool premise: disabled characters facing apocalyptic situations. I wrote about the one I knew best: retinitis pigmentosa, an inherited vision disorder that usually manifests as night blindness (inability to see in the dark). Again, I got shortlisted for the anthology, but ultimately not selected.

I kept working on the story. That’s what writers do, I’m told. That work paid off, because Mike Resnick bought it for Galaxy’s Edge magazine. It came out in the November 2017 issue, and might be my favorite short story I’ve published.

Side note, I’d be happy to send you a free electronic copy of any of these stories if you’d like to read them. Just shoot me an e-mail or reach out on Twitter.

As a scientist, I’m always interested in the scientific and technical underpinnings of sci-fi. As a geek, I’m also intrigued by the historical and world-building aspects of fantasy. Sometimes authors get the facts wrong. It’s undeniable. And as I engaged the writing community, I stumbled across many people who also happened to be in-the-field experts about many of these topics.

That was the genesis of the Science in Sci-fi, Fact in Fantasy blog series. Each week, we tackle the technical/medical/scientific aspects of sci-fi, or the historical/cultural aspects of fantasy, with input from an expert in the field. At my last count, the series had 115 articles. It’s proven to be a great resource for authors, and I’m developing it into a book with Writer’s Digest.

Along the way, I also had the opportunity to contribute some articles Baen, Outer Places, SFWA, and other venues. Here’s a selection of my favorite pieces:

In Which I Gain Entry 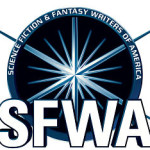 In January 2016, I qualified for membership in the Science Fiction & Fantasy Writers of America (SFWA), the professional organization for SF/F authors. I really liked the organization, which offers some great services to support the writing community. I wanted to get more involved.

Last year, I thought about running for office in SFWA, but decided I should probably spend some more time there first. So I answered the annual call for volunteers and found myself on the SFWA Grievance Committee (GriefCom) under Ian Watson. That’s been a very interesting experience that I’m not allowed to talk about, but I’m glad to have found a way to give back.

Over the past few years, I’ve found a few ways to help up-and-coming writers. I’ve been a Pitch Wars mentor since 2015, and also founded the #SFFpit Twitter pitching event for authors seeking representation/publication. The successes of those contests are many (especially PW), and too numerous to list here. But I’m proud to have been a part of them.

That brings us to today, when I’m faced with the reality that my time as a “new writer” is coming to its official end. I’m in my second (final) year of eligibility for the John W. Campbell Award for Best New Writer. So are many other worthy writers, frankly — the full list of them can be found here — but if you find room for me on your nominating ballot, I’d be grateful.