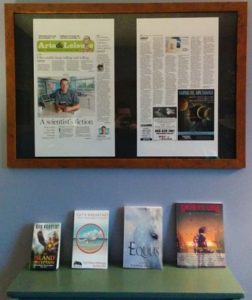 As 2017 comes to a close, we can all agree that it’s been a turbulent year. A difficult year, for a lot of us. And yet, there are some things to celebrate. New books, new book deals, and even a few short stories. Plus one super-secret project I’m not yet allowed to talk about.

As long as you’re here, maybe I’ll share the highlights from my 2017 year in writing. 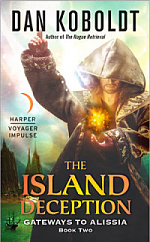 Back in April, Harper Voyager published The Island Deception, also known as book #2 in my Gateways to Alissia series about a Vegas magician who infiltrates a medieval world. I worked really hard on this book, including the revisions guided by my editor David Pomerico. But I think it paid off: the reviews have been favorable, and many people told me how much they liked it.

Is there a bit of a cliffhanger ending? Sure. But I think it takes the series to the next level, and sets up the finale, The World Awakening, which will be out early next year.

SFFworld  just named The Island Deception one of their Best Fantasy Books of 2017, which really made my day. 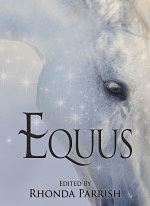 I had two short stories come out in themed anthologies over the summer. First, I wrote a short story for EQUUS, a horse-themed anthology from World Weaver Press, edited by Rhonda Parrish. I’d tried to get into a couple of her Magical Menagerie anthologies before to no avail. This was the last one, so it was a thrill to land a story in it. And to share the Table of Contents with SFWA Grand Master Jane Yolen (of How Do Dinosaurs Say I Love You fame).

My story (“Above the Silver Sky”) might be classified as YA; it’s about a girl who takes a desperate flight — on a horse, obviously — to save her village from a sudden drought.

My other story is one I wrote last November in response to a themed anthology call from Third Flatiron Publishing. Their Cat’s Breakfast anthology was a double issue (30 stories!) in tribute to Kurt Vonnegut. My story (“37”) takes place in a world where everyone is culled from the population on the day they turn 37, and it’s about a guy who inadvertently finds a way to beat the system.

You can still pick up that anthology in e-book or trade paperback formats.

My Fifteen Seconds of Fame 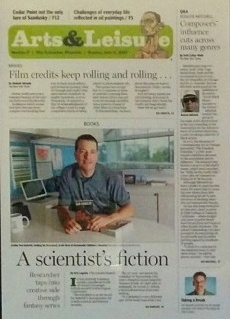 Also in July, the Columbus Dispatch was good enough to run a feature article on me in the lifestyle section highlighting my work as a scientist and my science fiction / fantasy writing. This was arranged by the fantastic PR/marketing department at NCH and I’m honestly still a little star-struck by the whole affair. It was a thrill to see my photo in the newspaper, above the fold no less!

It also helped drum up some publicity for a book signing I did at The Book Loft the following week. In the past year, that bookshop has become one of my favorite things about moving to Ohio. I’ve done a few events with them, count myself incredibly lucky to have found such a great partner in the bookselling business. On multiple occasions, they’ve let me set up a table in the fiction wing and gently harass their customers.

The Science in Sci-fi Book

Another major milestone this year was developing a nonfiction proposal to develop Science in Sci-fi blog series into a physical book. The idea was to collate and expand upon the outstanding content we’ve developed on the blog into a reference for writers. The natural publisher for such a book, of course, was Writer’s Digest. Thus, we were thrilled when they liked the proposal enough to make an offer.

Putting the Science in Fiction will contain 60 articles from 40 expert contributors, including a lot of unique content that’s not available on the blog. I can’t yet share the awesome cover or the name of the kick-ass writer who’s writing the foreword, but stay tuned. But I can tell you that it’ll be out in Fall 2018 from Writer’s Digest Books. Jump on the mailing list if you’d like a reminder.

I served as a mentor in Pitch Wars once again, co-mentoring with 2015 mentee and soon-to-be published author Michael Mammay. I can’t speak for him, but I was quietly hoping to find a space opera. We had so many great submissions that it was near-impossible to choose.

Ryan McLeod’s PIRATE ticked all of the right boxes: action, voice, and humor in a rip-roaring space adventure. Some agent is going to sign him, and then some editor is going to fall for PIRATE the way we did. I’m absolutely certain of it. 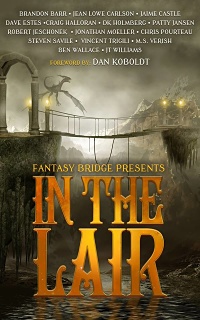 Earlier this year, I joined a group of like-minded fantasy authors called Fantasy Bridge. Basically, it’s an author co-op: we help each other out with finding new readers for our books. In the Lair is our first short story anthology, and offers fantasy fans 15 stories from up-and-coming fantasy authors.

I had the privilege of writing the foreword for the anthology, which means I also got to read all of the stories. Let me tell you, there are some really good ones there. You’re bound to find at least one or two that you love, and at 99 cents, that seems like a bargain.

The Coming of Darkness 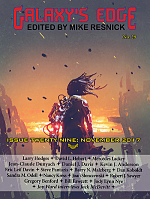 A couple of years ago, I heard about a themed anthology about disabled characters trying to survive the apocalypse. So I wrote this story about a guy with retinitis pigmentosa — an inherited vision disorder that first manifests as “night blindness” — faced with a worldwide blackout. It didn’t get into the anthology, but I kept working on that story and came to think it’s one of my best. That’s why it was a particular delight when Mike Resnick accepted “The Coming of Darkness” for Galaxy’s Edge magazine.

My story appeared in issue 29 (November 2017), which is still available in the magazine archives. It’s award-eligible, by the way, so please contact me if you’re nominating and would like to read a copy.

The Coming of Secret Things

There are some other exciting developments on the writing front. I’m super excited for secret reasons! Hope to be able to share more soon. In the meantime, thank you all for your support!

I’m also in my second year of eligibility for the Campbell Award for Best New Writer. The story of my eligibility is pretty entertaining. I hope you’ll check it out.