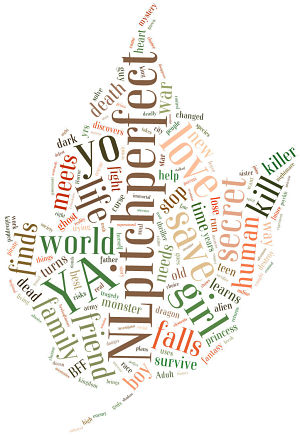 Authors love Twitter pitching contests. There’s no question of that, given the fantastic participation in events like #PitMad. How do already-pressed-for-time literary agents feel about them?

Apparently, some agents like Twitter pitching enough to host an event of their own. On May 23, the assistants at New Leaf Literary & Media hosted #NLpitchperfect, a two-hour window in which authors could pitch their work to three of New Leaf’s agents.

One thing I love about Twitter pitching contests is the tracking capability. With Twitter’s developer API, I can pull down all tweets for any hashtag during a certain window. As I’ve done previously for #PitMad, I used this to generate some statistics on #NLpitchperfect participation.

New Leaf assistants asked for pitches on behalf of three of their agents: Joanna Volpe, Suzie Townsend, and Kathleen Ortiz. The types of books they represent almost certainly influenced who’d be pitching to them. According to New Leaf’s web site, here’s what they’re looking for. 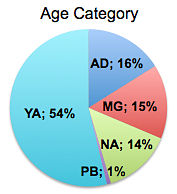 There were just over 800 tweeted pitches from 370 participants in the 2-hour window. Many authors were kind enough to include tags that indicate age category and genre of their novels, which allowed me to provide some interesting breakdowns.

Parsing the age category from Twitter is usually straightforward, since they have clear acronyms and most authors need to save space. Young adult (YA) was the dominant category, which isn’t surprising given that all three agents represent it. Adult, middle grade, and new adult each accounted for about 15% of pitches. There were even a handful of picture book pitches.

Not all pitches included an easy-to-parse genre, but there were enough for us to get a general feel of the breakdown. Only about 1/4 of pitches included a genre tag that I could readily parse; the two dominant genres were fantasy (27%) and science fiction (22%). That’s great news for #SFFpit, my upcoming Twitter pitching event for sci-fi & fantasy authors.

Romance made a strong showing for third place (18%). Everything else (thriller, historical, urban fantasy, literary, or other) accounted for less than 10%. Keep in mind, though, that about a third of pitches included an age category but no genre, so they might represent general fiction or a genre I wasn’t trying to parse out.

As declared well in advance, the assistants and agents at New Leaf Literary weren’t going to be favoriting tweets in real time. This is a bit of a bummer, since that’s part of the thrill of these interactive contests. Even so, they got to work soon after the contest had ended. At my last count, they’d favorited no fewer than 78 pitches. Some of my favorites were:

@KitaraLeMur: Firefly/Outlander. A book links alt timelines. Kadence gets stuck in space, the one man who can help her she wants to kill. #NLpitchperfect

@FountainWriter: YA PN: A psychic high schooler reveals a hometown tragedy by connecting to the missing, but a dark being has other plans. #NLpitchperfect

@mph2003: A free woman of color, Angelique (17) is determined to find her own place in 1825 New Orleans, until yellow fever strikes. #NLpitchperfect

@wlparri: #MG To stop a creepy ghost, a 12yo girl follows clues in old letters to an abandoned farm & uncovers a tragic family secret #NLPitchPerfect

Even though a lot of pitches got favorited, by my estimation only about 20% of the participants had this happen. This reflects both the challenge of writing a good Twitter pitch, and the subjectivity involved on the agents’ side. And remember, this is just an invitation to send a query that might get a bit more attention because it came through this contest. That’s why it’s important to query widely — your pitch and query and BOOK might be fantastic, but it also needs to get in front of the right agent. The one who will love it, and fight for it, and work hard to get it sold.