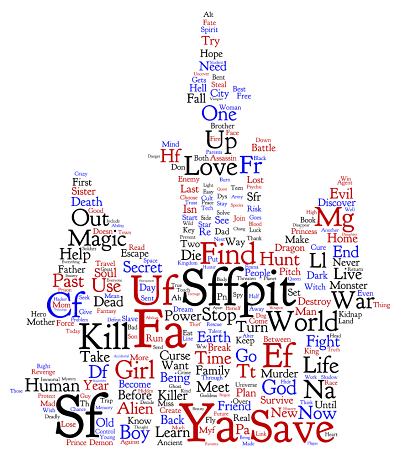 Last week’s #SFFpit event on Twitter proved a smashing success! Leading up to pitch day, we had a few events: a warm-up event the week before, when I challenged authors to craft pitches for Lord of the Rings or Star Wars. The day before the contest, many authors made intros on the hashtag with “two truths and a lie.”

It was hard to say, at that point, how many authors we might have pitching the next day, though about a dozen literary agents and four or five small press editors had agreed to participate. 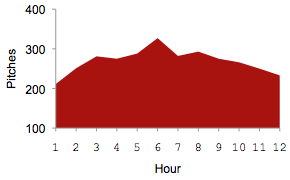 What a spectacular turnout! The hashtag was busy all day, with the peak period (>300 pitches per hour) happening around 2 p.m.

I’ve listed the participating agents and editors in a separate post on who’s coming to #SFFpit. It’s safe to say that there were many more than I’d thought to invite. They’re already getting #SFFpit submissions. My favorite note so far was the first in a #tenqueries session by Margaret Bail of Inklings Literary Agency:

Yes! Seeing something like that had me pumping a fist in the air, because it means our event  is having tangible results.

Pitches by Age Category and Genre 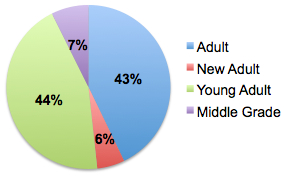 How did the pitches break down? One reason I tried to provide plenty of hashtags was so that I could give you the following breakdown. There were 3,248 pitches that contained at least one age/genre hashtag. Classifying these first by age category, we see that young adult pitches predominated, accounting for 44% of pitches. This is something we saw in Brenda Drake’s #PitMad and New Leaf Literary’s #NLPitchPerfect as well.

Adult was a close second (43%), but this needs a disclaimer: if a pitch had a valid genre but no age category tag, I assigned it to adult. So this likely counts pitches intended for younger audiences. We saw smaller proportions of new adult (NA) and middle grade (MG) pitches, and even a handful of comic books (<1%). 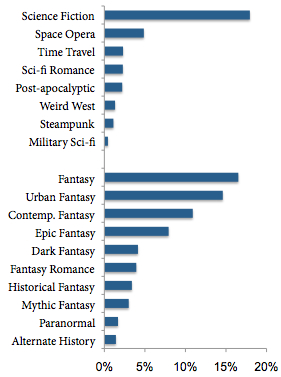 I had fun coming up with hashtags for subgenres of sci-fi and fantasy, many of which were specifically requested before the event. Broadly speaking, pitches labeled with a high-level genre were almost equally divided between sci-fi (18%) and fantasy (17%).

The most common subgenre, urban fantasy (15%), didn’t surprise anyone, but the #2 subgenre did: contemporary fantasy, accounting for 11% of pitches. These, together with epic fantasy (8%), accounted for about 1/3 of pitches. In other words, fantasy and its subgenres claimed the majority of pitches. The most prevalent SF subgenre was space opera (SO), representing 5% of pitches.

In my previous post on the winners of #SFFpit, I told you that less than half of the 500+ authors who entered had a pitch favorited by one of the 26 literary agents I Twitter-stalked. Only around 15% got favorites from two or more agents. Strikingly, the age categories and genres of favorited pitches mirrored the entry distributions exactly. That is, agents weren’t searching for a certain type of book, just a really good pitch.

What’s Next for SF/F Authors?

Hopefully some of you got favorites from agents or editors. This is an invitation to submit, not a requirement. Do your homework, and only send your materials if you think the agent or press is a good match. And the work must live up to your pitch’s promise; this isn’t a silver bullet for literary representation.

Even if you didn’t get a favorite, almost all of the agents who showed up to #SFFpit are open to standard queries. Go find their guidelines, mention that you admired their participation in #SFFpit — don’t claim that they favorited your pitch, unless that’s true — and give them your best shot.

If you’re still searching for representation or publication in August, there’s a more in-depth pitching contest called #PitchWars. I’ll even be one of the mentors (in adult SF/F), so I’ll have a close eye on it. Follow Brenda Drake’s blog to get the details.

Here are some other great blog posts from participants in #SFFpit: