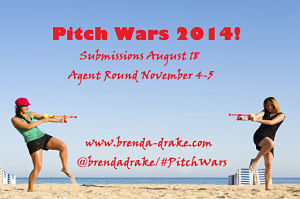 I’ve finished responding to all 74 writers who submitted to me during #PitchWars. It took me a long time to write these responses, but I enjoyed it and I felt I owed it to all of them. Even though I could only pick two for #TeamBioMind, all Pitch Wars submitters should be proud of two things.

If you read my Pitch Wars Mentor Bio, you learned that I was looking for adult submissions in the genres of science fiction, fantasy, and thriller. I read and write these genres, so these were the ones I was most comfortable in mentoring. 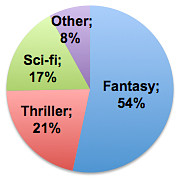 My Submissions by Genre

In my last post breaking down the overall Pitch Wars submissions, I told you that fantasy was the most dominant genre by far. This held up in my submissions; more than half of them (54%) were labeled fantasy. Thrillers (21%) surpassed science fiction (17%), which I found a little surprising. I also received a smattering of “other” category: literary, mystery, even a women’s fiction submission.

Note, I’m counting five submissions that were for an age category other than adult. Some of these sounded intriguing, but because of contest rules, I couldn’t consider any of them. It’s not my fault! Brenda Drake is a harsh taskmistress.

Historically, #PitchWars is dominated by female authors (and mentors, for that matter). I think last year it was something like 90% female. Among my submissions where I could infer gender from a name, and assuming that I did so correctly, 41% of my submissions were from men. I think this means that I drew a disproportionately high number of male submitters. That’s a perk of being one of the handful of male mentors. Team Y chromosome, baby!

Now I’ll delve a little bit into some of my slush impressions. I want to preface these with some caveats:

In the days of print submissions, the advice on query letters was to keep them to one page. In the e-mail era, it’s harder to know how that translates. However, a lot of the queries I saw were still too long. At most, a query should be 4-5 paragraphs, with each paragraph having 2-4 sentences. That includes opening, pitch, bio, and closing.

I did see a few queries that were too short, but this was rare. In these cases, I encouraged authors to make the most of available space to catch an agent or editor’s interest.

The most common issue with queries by far also happened to be the most important part: the pitch and query synopsis for the book. The formula for this is pretty simple: character, goal, obstacle(s), and stakes. And SPECIFIC stuff for this, too. I saw too many queries in which:

An author who hopes to win literary representation should understand a little bit about the publishing market. Part of that is knowing the recommended word count ranges for your age category and genre. Literary Rejections has a guide to this (link updated August 2018) and generally speaking, adult thrillers should be 70K-90K, sci-fi/fantasy 90K-100K. As a debut author, going over 100K is a gamble. It makes agents and editors unhappy.

Yet I saw several submissions at 130K, 140K, or even 150K. These were auto-passes for me because I knew that I couldn’t help critique a work that long during Pitch Wars. For an agent or editor looking to clear out the slush pile, they might be an auto-pass, too. Bottom line, don’t give them an excuse to reject you out of hand.

Another thing I noticed: authors telling me that this is the first book in a 3-, 4-, or 12-book series. Worse, the author’s already written book two and is chugging along into book three. Look, I’m never going to tell someone to stop writing, least of all a new author. But you should know that, most of the time, there’s no point in writing book two until you land an agent and manage to sell book one. If you can’t do those things, writing book 2 was sort of a waste of time (other than writing practice).

If you’re still writing now that your book is done, and queryable, that’s great. I hope you’re writing a completely different book so that you can begin querying that if you strike out with the first one.

Too Much Bio, Not Enough Book

I saw a lot of queries in which authors talked about their inspiration for the book, how they wrote it, how much they love to write, etc. Or I got a life story that was half a page long. The bio should be 2-3 sentences, maximum, with an emphasis on things about you that are unique, interesting, and relevant to the book at hand. These include:

Beyond that, keep it to a minimum. Writing about yourself is easy, but you should resist that temptation.

Another common problem is sales-y language in the query. Personally, I think this is something to be avoided entirely. You may think your book is fast-paced, suspenseful, imaginative, compelling…. that’s fine. Personally, I found this sort of thing off-putting. I think that authors need to let their work speak for itself.

I read the first chapter of almost every submission sent to me. Oddly enough, the query letter had very little bearing on the quality of the writing in the sample chapter. As I wrote feedback to the 72 entrants I wasn’t able to pick, I noticed a few common themes:

There were some recurrent, overdone themes in submissions. About 15% of the fantasies I saw were about elves. I love elves as much as anyone, but so many of these came off as cliche, as carbon copies of Tolkien’s elves. Some fantasies have gotten away with that, even in recent years, but I think it’s getting harder to do. I didn’t get any zombie stories, but I saw the occasional vampire, which remains a tough sell right now.

Ultimately, I had to think about what literary agents seem to be looking for right now. Vampires, werewolves, zombies, and mermaids are out of vogue. Give them a couple of years and I’m sure they’ll be back.

My Picks and Overall Impressions

I really enjoyed getting to play at literary agent for a couple of weeks. Let me tell you, I had a glimpse into what it’s like to get a flood of queries, and I came out with even greater respect for what literary agents do. It’s a thankless job, in many respects. A difficult job. I admire anyone who can do it as a career.

Ultimately, I requested pages from about 7 or 8 of my favorite submissions. There were three that I absolutely loved and couldn’t get enough of. One of these was picked by another mentor. The other two became my top picks:

There were 3 or 4 authors who submitted to me but were picked by another mentor. Those congratulations e-mails were fun to write. That still left almost 70 who received an “Alas” letter instead. It was less fun, but I tried to be helpful. I admitted that contests like these are hugely subjective, and encouraged them to keep querying. To keep writing. And I’m sure that most of them will.