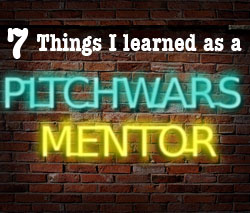 Last week was the climax of Pitch Wars 2014, the agent round at Brenda Drake’s blog and alternate showcase hosted by Dee Romito. As one of the mentors, I had a glimpse of what these pitching contests look like behind the scenes. It seemed worth sharing these lessons.

It’s difficult to put into words the amount of work required to host a contest like Pitch Wars. I don’t even know the full scale of what Brenda did for it, but I know that she had to spend time on:

Let’s try to remember Brenda’s heroic efforts when her book LIBRARY JUMPERS comes out in 2015.

I worked with Brenda on the submission system, which we hoped would streamline the process and prevent some of the Gmail-associated nightmares that Brenda and company experienced in previous contests. Here’s how the new one worked:

3. Being a mentor is a lot of work

My role as a mentor started way back in July, when Brenda and I did a workshop critique for two randomly-chosen PitchWars hopefuls. Side note, I critiqued a query letter from Vanessa Lillie, who went on to win an alternate slot with Sarah Henning, and got a request from Jessica Sinsheimer in the alternate showcase. All mentors did a blog hop in which we talked about our critique styles, writing experience, and manuscript wish lists. We answered questions on Twitter in two Ask the Mentors sessions. Many of us also participated in the mentor videos, either the short 30-second introductions, or the longer (and hilarious) video chats hosted by Tonya Kruper.

The work for mentors really picked up when the submission window opened, and we found ourselves inundated with queries and first chapters from Pitch Wars hopefuls. I myself read 70+ submissions; see my PitchWars Hard Numbers post for some detailed stats. Some mentors had over a hundred submissions. That is a A LOT of reading; it’s hard to imagine that literary agents usually do this in their spare time, often at night or on weekends. And some mentors do more than just read; Julie Sondra Decker filled out a detailed scoresheet for each of her submissions.

Then there was the back-and-forth of requesting partials and fulls from authors. I really enjoyed that.

I really enjoyed interacting with the other mentors, both in public spaces (blogs and Twitter) and in our private forum. It was awesome, and hands-down my favorite part of the whole experience. I got to know some of them really well. Most of us are neo-pro writers: represented, but still somewhat new to the publishing game. I think it’s important because we’re only a little bit farther along in our careers than the Pitch Wars applicants, so we remember what it was like to be in their shoes. It helped.

On the public side, I enjoyed sparring with the likes of Julie Sondra Decker and my arch-nemesis Charlie Holmberg. In our private forum, the mentors soon began jostling for their favorite submissions. I was lucky enough to keep the other mentors away from my top picks. In fact, I had one too many. This was serendipitous, because another mentor was looking for more submissions, because she wasn’t in love with any of hers. I knew right away that one of mine would be perfect for her, so I got to see three of my favorites get into Pitch Wars.

Other mentors weren’t as lucky — some of them had the same top pick, in which case the author got to decide. I’m told there was ugly crying in the aftermath of some of these matchups.

I would love to tell you that all of my 70+ submissions were fantastic, and I agonized over picking favorites. Sadly, as I wrote in my Pitch Wars Mentor Feedback post, this was not the case. I was able to eliminate about 90% of my submissions with the query and first chapter. Some of them were just easy, almost-automatic passes:

About 15 submissions had one of the above issues, and honestly I didn’t even read the sample chapters for these. I read them for the other 50+ submissions, though, which was a lot. I understood very quickly why agents often ask for some pages to accompany the query. Usually I could tell within a couple of pages if the submission was a contender. Sadly, the answer was usually no. I used mail labels to mark my submissions. The two most common reasons for a pass were:

I ended up requesting more pages from 9 authors. Unfortunately, some of these just didn’t live up to the promise or excitement of the first chapter. About five were serious contenders at the partial stage.

6. The PitchWars hopefuls were fantastic

Another favorite part of this experience: the energy, excitement, and passion of all #PitchWars hopefuls going into the pick announcement. They did Google chats. They did their own blog hop. They were all over the Twitter feed. It was like the publishing version of the NFL draft. They made it fun for all of us. It was also bittersweet, because we knew that most of them were going to be disappointed when the picks were announced. And sure enough, a couple of days after the picks were announced, #PitchWars went quiet. For almost 2 months.

Behind the scenes, we mentors were getting to know our mentees, and reading/critiquing their books. I understand why most of the hopefuls who weren’t chosen essentially bowed out of participation at all. I’ve been there myself, and it’s kind of hard to stay excited about the people who got picked over you. In addition to working with my mentees, I also wrote a message to every person who submitted to me. Not all mentors were able to do this, but many of us did. I tried to offer some words of thanks and encouragement, along with specific feedback if I had any.

I wrote something like 70 such “Alas” e-mails. I didn’t ask for a reply, but 40 of these authors wrote back to say thank you. It’s not something you should do to an agent who turns down your query or partial, by the way, but I enjoyed it. And I awarded them points for their professionalism and thick skin. That’s what it takes to make it in this business.

7. There would be drama

Many of the mentors might not have survived without our private communication channel, our discussion forum. All kinds of crap happened during this contest. Mentors and alternates dropped out, either for wonderful (i.e. got an agent) or puzzling (decided to self-publish) reasons. Some mentees were a little high maintenance. And even though we had this burden of work on us, the mentors also had our own trials and tribulations to deal with. It was very nice to have a support network of 70 other friends to commiserate with or ask for advice. And we could always turn to the rock upon which the Pitch Wars church was built: Brenda Drake.

You may think that the Pitch Wars authors were the only ones to celebrate and/or suffer during the agent round. I promise, we mentors were right there with them the whole time. We knew going in that some authors would get more requests than others. That didn’t make it easier. We griped and complained about details as small as the numbering of submissions (guilty) that could be affecting the outcome. We took it as a personal failure when our mentees didn’t get requests.

I was lucky. Both members of #TeamBioMind — Bianca Nogrady and Amy Cavenaugh — were consummate professionals throughout the whole process. And they both got requests, a considerable achievement in a contest where adult entries are just never going to get the attention that MG and YA pitches do. I’m very proud of them, pleased with the results, and grateful that I got to be part of Pitch Wars 2014.