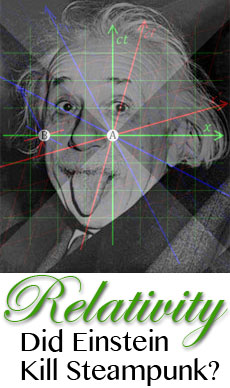 See also his excellent posts on the basics of gravity and nanotechnology for SF/F authors.

In the 1800’s life was good. Steam-engine riding folks in Europe were all in on the new science of Maxwell and soon Marconi would send sound over wireless waves in the ether.

But there were two dirty little secrets that threatened to destroy that idyllic steampunk world of the late nineteenth century. Queen Victoria herself, if she knew them, would have kicked the bucket—or perhaps the fantastic flushing toilet of Thomas Crapper.

These two great puzzles, when solved, opened to us the power of the atom and gave birth to the nuclear age—effectively obliterating the steam era, much to the chagrin of all of us who find it fantastic to fantasize about.

One of these dirty little secrets was the “ultraviolet catastrophe”. The solution which came from Einstein’s idea of the photon gave birth to quantum mechanics.

The other dirty little secret was electromagnetics. (Eek, it didn’t work!) And it was all because of this little (huge) problem called the speed of light.

For now, to figure out what this special relativity business is all about, let’s put on our riding goggles and take a brisk ride in a bouncing buggy back in time to the late 1800’s.

Here is how a steampunk scientist saw the world:

In a steampunk world, things were simple. Wiggling charges created electromagnetic waves in the ether. Everyone’s clocks and measuring sticks agreed, even if they were moving past each other whilst making precise measurements with elegant pocket watches and ivory-handled canes, all while wearing dapper waistcoats and top hats. The fundamental premise of this world was that things that happen at the same time for me, happen at the same time for everyone, a world good enough for Galileo.

There is one teensy little problem. When you start accelerating charges, they make waves before you move them—wait, what?!!! (That’s because by riding on a train you can get your flashlight to shine at the speed of light plus 45 leagues per hour, so causality breaks down.)

I’ll spare you the math. It’s bad, and when you’re done with 3 pages of it, you get equations that are nonsense. So…if you like a world where none of the rules make sense: you are a steampunk scientist! Smoke your pipe with no thought of lung cancer, ride a steam train—or steam boat if you prefer—and use some burning magnesium for your photograph flash! The speed of light—poppycock!

How Einstein Saw the World

After Michelson and Morley flabbergasted, flummoxed and discombobulated themselves and the whole scientific world by discovering there is no ether—what!!!—a few ideas had to change. The first postulate or premise of Einstein’s ether-less universe was that everybody experienced the same laws of physics.

It’s very fair. Everything about Einstein’s work has that pragmatic feel to it. That never-failing “simple, easy, works for everyone” math expunged all the great quirkiness of steampunk science.

Postulate number two (and this is the kicker) is that everybody measures the same speed of light, regardless of whether they are in a box with a fox, or on a boat or in a train.

That last point had some interesting implications. It meant that Einstein had no choice but to relate the experiences of people moving past each other using a kind of transformation worked on by braniacs with names who started with “L”: Lorentz, Lorenz, Larmor (and some people’s names that don’t start with “L” such as Voigt and Poincare’). This Lorentz transformation is the basis of special relativity and is one of the three great hammers that struck down our romantic and mysterious steampunk world of the 1800’s and took us into the nuclear age of mutually assured destruction and television advertisements.

The first conclusion is that the universe is like a picture with two kinds of axes. You can stretch one axis on a picture and distort it, without changing the details of the picture. All the dimensions of space are like one axis. And the second axis is another kind of distance: time. Time has units of seconds, so we scale it by the speed of light in units of meters/second or miles/per hour, to change it into a distance. All events take place somewhere in this “picture” called spacetime. The distance between two events is measured along both time and distance, like the distance between two pixels in a photograph being a combination of horizontal and vertical distances.

Is the speed of light mysterious and mystical? No, it’s just the scale factor our universe uses to relate time and distance. It’s not mysterious at all. Even worse, (steampunk fans flee while there is still magic in the world) the speed of light is the same for everybody. You see, unfortunately for social philosophers, relativity isn’t about things being relative, like my morals versus yours. It’s about absolutes! There is one speed of light for everybody, all day, all the time, ever. Not very romantic at all.

So, what does it all mean?

The Implications of Space-time

Distances in space-time are constant for observers having a picnic in the countryside as well as those riding first class on steam trains. Unfortunately, that has some consequences for pocket watches and ivory handled measuring sticks/canes. When I move past you, my universe “picture” is distorted so that I think I’m measuring the speed of light the same as you. My times don’t line up with your times—or in the case of a well-framed photograph of an idyllic Victorian family with well-behaved children and a contented-looking mother who might possibly soon die from tuberculosis—your universe is skewed from mine. Both our universes (reference frames), the one on the ground and the one moving along at a heady clip down the lane work just fine. But when we examine each other’s universe picture, we find it distorted relative to our own.

Events are no longer simultaneous. You say the revolver shots happened at the same time, but when I move past at close to the speed of light, I see them happen at different times. My clock runs slower than yours, and strangely things aren’t so far away as they used to be when I looked at them before I caught the express trolley.

Of course you’ve all heard this before, and most of us think it sounds mystical: time dilation, the effect of slower time when you get close to the speed of light; and length contraction: the idea that distances to objects ahead of you appear shorter when you head toward them at speeds close to the speed of light. But it gets worse. Moving electrical charges or currents, generate magnetic fields, right? So if I move past some charges, it’s the same as current moving past me. There has to be a magnetic field. Thankfully relativity changes your electric fields into my magnetic fields and vice-versa in a wonderfully symmetric way that makes the whole math simple enough to express all four of Maxwell’s equations of electromagnetics in a single (matrix) equation.

What Happens At the Speed of Light

Without going into the math (which starts out not too bad then gets a little wooly, like food left out of the ice box—I mean the refrigerator), the idea is this: there is a parameter called γ (gamma) which starts out a 1 (things act like steampunk), then as you get close to the speed of light, its gets bigger and bigger and goes to infinity as you approach the speed of light. That parameter tells me how to stretch your universe picture (spacetime) to make it agree with mine on the timing of events and the measuring of distances. It’s that simple.

But it’s also really cool. At the speed of light, time stops, because you’ve squished spacetime flat. So subatomic particles that are generated by cosmic rays in the outer atmosphere which should normally decay and disappear before they reach the surface of earth—even travelling at close to the speed of light—actually make it to earth’s surface to mess with our electronics just fine.

So, next time you’re dinner party discussion about Franco-Prussian relations is interrupted by an Orwellian machine that abducts you and heads out into space, you’ll find that the distance to the star you are headed for is much shorter that it appeared on earth. But when you get back to earth after only a few months journeying among the stars, everything has changed Rip Van Winkle. You’re in the digital age. But thankfully your fancy electric filament bulb flashlight still works.