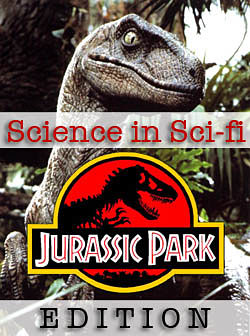 Today’s article is a guest post from microbiologist Mike Hays. He’s from Kansas, a tried and true flat-lander by birth. He has worked as a molecular microbiologist for over 25 years, has coached high school sports, and is a middle grade author.

The Science of Jurassic Park

When the small Procompsognathus appeared on the Costa Rican beach in JURASSIC PARK as I read the book for the first time, I jumped out of my chair with excitement and hit my head on the light fixture. By the time I settled back down with the book in one hand and a towel pressed against the cut on my scalp with the other hand, I was hooked. After the revelation of the cloning of dinosaurs and the science involved, I was firmly in “can’t-put-this-book-down-or-even-talk-to-my-wife” mode. I still re-read the book about every five years and that magic is always there, a magic grounded in the book’s science and technology.

I was a fledgling molecular microbiologist when the book first came out. I was learning the technology of molecular cloning and the revolutionary new technique of polymerase chain reaction (PCR). I remember the science of JURASSIC PARK, both the fictional and the actual science, created an uproar within science community and led to the big question:

Could we really clone dinosaurs?

Scientists thought about it.

Scientists argued about it.

Scientists wrote about it.

There was much debate about cloning, sequencing, embryology, and paleontological theories on dinosaur behavior. What was perhaps overlooked in the discussion was the fact that JURASSIC PARK was a science fiction thriller. Michael Crichton did such an exceptional job building the world, I think we all got caught up in the possibilities he presented.

In science fiction, the science need not be 100% accurate; the science needs to be plausible and logical within the world build. In my opinion, Crichton does that rather well in JURASSIC PARK. He lines up the scientific details, everything from large cobra venom-like protein toxins to genomic space-filling frog DNA, and ticks them off like a timer on a bomb counting down the seconds to disaster.

Here are some of the good science things in Jurassic Park.

He brought the most cutting-edge theories in paleontology to life within the framework of the most exciting new molecular technology ever discovered. He re-invigorated dinosaur mania for a whole new generation.

To me, the most impressive science facet of JURASSIC PARK was the integration of chaos theory into the story. Chaos theory is when small changes in the initial conditions of a complex system lead to drastic changes in the results.

I like the double pendulum chaos animation at the following YouTube link as a model to illustrate the basics of chaos theory. The hinge in the center of the pendulum’s arm is the small change in the system. As the pendulum swings, it pretty much holds to an orderly swing pattern for about 5 trips. After the 5th trip, the order breaks down and the arm goes haywire. The small initial change manifests into a totally chaotic pattern.

Now, think back to JURASSIC PARK. The first part of the visit to the park is relatively ordered, just like our pendulum model. Then one by one the compounding small mistakes, which existed in the park’s plan from its inception, begin to crumble the perceived order of the entire system.

Every facet of the JURASSIC PARK vision tumbles into chaos.

JURASSIC PARK pushed the limits of the fledgling molecular biology knowledge base in the late 1980’s. Crichton did the best with the technology he had available and did his best to be accurate. In areas where he was weak in his knowledge base in JURASSIC PARK, such as the sequence database information errors in some of the representative Genebank sequences, he sought in bioinformatics experts as consultants for his sequel, LOST WORLD.

The Stretches in Science

Cloning basically means to copy, so if you want to clone something, what do you need, first and foremost? An intact genome.

But, finding a genome template from ancient samples with enough intact information in the blueprint to produce more than a few genes is very difficult. The quality and amount of ancient DNA depends on the sample preservation and natural degradation of the genomic DNA. DNA, the chemical strands that contain the genetic instructions for the development and function of living things, is a fairly stable biological molecule. DNA is stable enough that LIFE trusts it with its past, present, and future. But, DNA degrades over time. It is difficult to find intact pieces in ancient DNA, especially in amber-trapped insects found in South American rainforest environments, as laid out in JURASSIC PARK. The extraction of the blueprint DNA from this source would probably not produce enough viable genetic information to clone even one deadly claw.

Recent advances in extraction technologies, enrichment of target DNA, and incredible jumps in genome and whole organism sequencing science increased the prospect of someday being able to cloned prehistoric animals.

Recent reports of successful sequencing project of wooly mammoths (10,000 years old), Neanderthals (38,000 years old), the genome of a girl belonging to an early species of Homo sapiens called the Denisovans – a close relation to the Neanderthals – who lived about 80,000 years ago (The study even reports she had brown eyes, hair and skin!). To push the envelope even further, the entire genetic sequence of a 700,000 year old extinct species of horse was published this year in the journal, Nature.

Interesting to note, all these ancient samples were discovered in a frozen state. Having probably been frozen for millennia, the DNA was better preserved than anything found in rainforest environment, amber-trapped insects. The result was a better genomic template and better templates = better sequence.

These advances in genome sequencing have stretched the ability of scientist to gather genetic information from extinct organisms almost a million years old. Not quite to the age of dinosaurs yet, but I hold out hope we may someday find a 65 million-year-old frozen dino-popsicle containing a solid genome.

Another scientific criticism from back in 1991 was the limited available choices for embryo development once a clone was established. The synthetic eggshell technology in the book was an easy out in this regard, but really wasn’t a applicable real-life method to hatch a dinosaur clone. Cloning dinosaur embryos may be one thing, but actually hatching and raising viable progeny is a whole different ball of wax.

In 2014 technology, with advances in stem cell technologies and the ability to reprogram a blank cell with a new set of DNA instructions, perhaps this hurdle could be overcome if we can learn to piggyback on existing natural reptilian systems.

As a professional scientist, I am pretty certain the discovery, development (especially on a scale of cloning dinosaurs) AND building a secret theme park on Isla Nublar, would have easily taken more than a decade. Even with a well-funded army of scientists, cutting-edge laboratories, and all the Cray supercomputers one could get one’s greedy hands on, it would have been a LONG process. Plus, how did they sneak all this technology and equipment past the regulatory agencies? 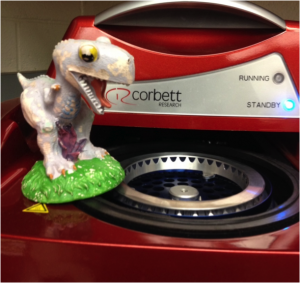 That’s What Sci-Fi Does

So, from a pure scientific standpoint and within the science knowledge base of the late 1980’s, Michael Crichton did a pretty darn good job with the genetics and molecular biology in JURASSIC PARK. He took these cutting-edge technologies and crafted a very entertaining and thought-provoking story world. Sure, there were reaches, but the reaches in science were plausible and logical within his story world.

Besides, can’t we give Michael Crichton a pass on some of the science flaws? He cloned dinosaurs! He lit a fire under the imagination of science and technology and raised the bar on the possibilities of new fantastical projects could actually happen. He sowed a seed in young scientist for future discovery.

That, my friends, is successful science fiction.

And that is enough for me.

(Just keep me away from Steven Spielberg and that cartoon DNA-strand narrated, animation ride he used to explain the background science of Jurassic Park to visitors in the movie. Grrrr….)

Now, where did I put that tattered paperback copy of JURASSIC PARK? I’m ready for a re-read.

Mike Hays writes from a boy point of view and hopes to spread his particular style of stupid-funny inspiration through his books, blogs and social media. His upper middle grade historical fiction novel, THE YOUNGER DAYS, is about a family’s survival in the fallout from the violent Border War over “Bloody” Kansas. He is part of the #MGLitChat host team for the Thursday evening weekly Twitter chat dedicated to the lively discussion of all things middle grade bookish.