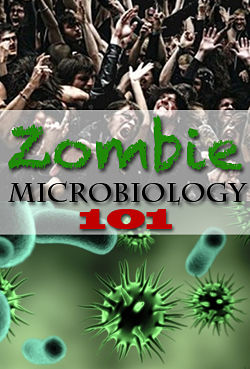 Today’s article is a returning guest post from microbiologist Mike Hays, who already wowed us with his take on the science of Jurassic Park. He’s from Kansas, a tried and true flat-lander by birth. He has worked as a molecular microbiologist for over 25 years, has coached high school sports, and is a middle grade author. Go follow him on Twitter.

Everybody loves zombies. Okay, maybe not everybody, but zombies have been a source of frightful entertainment for years and their popularity appears to be at an all-time high in today’s media market. Why are we so drawn to them? Robert Kirkman, creator of the Walking Dead comics, believes it is our innate fear of death which draws us in. And, like relentless nature of death, he says, “Zombies are out to get you; no matter how hard you try.”

Author Mira Grant of the Newsflesh series, thinks zombies hit the human fear chord toward infectious diseases and the potential loss of self and identity caused by a serious infection. The answer probably lies in a little of both fear theories. I lean toward the infectious disease fear side of the fence, though. Maybe the fear of being chased by relentless and seemingly endless mass of reanimated corpses hell-bent on eating my brain is enough to draw me in, but the fear of losing myself to an unseen microbial Zombie Factor that strikes without warning, is what brings me back craving more.

The world turned to chaos as flesh-eating reanimated corpses shuffle across the planet seeking human brains for a snack, caused by a zombie virus. The zombie virus is a very popular causative agent in today’s zombie media culture. Books, movies, and TV shows featuring the zombie-caused-by-virus story. But, is it plausible? Maybe, maybe not. Let’s take a look past the decaying flesh, the characteristic, zombified gait, the insatiable drive to consume human flesh, and delve deeper into the potential causative agent of the Zombie Factor. 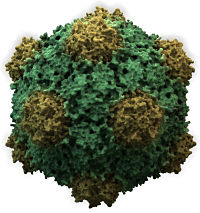 Probably the most popular microbial agent for Zombie Factor is a virus. Viruses are a logical choice. They carry the fear stigma we’ve come to associate with massive outbreaks of diseases, like smallpox, influenza, Ebola, HIV, rabies. Perfect for the Zombie Factor, right? Well…maybe not. The most dangerous viruses, the ones which spread rapidly, are usually spread by airborne contact. Other modes of transmission like infected animal bites, insect bites, and ingestion/contact with infected body fluids are slower methods of viral transmission, which in turn, slow the spread of the disease.

The Zombie Apocalypse would require a high velocity transmission virus to be effective against the intelligent, always prepared human populace. Viruses have limited genome size and complexity. They infect cells and may hijack some cellular processes, but I don’t believe they actually have the genomic power for a massive transformation from human to zombie. It’s a sexy, simple agent on which to base a Zombie Factor, but, in my opinion, it just doesn’t have the mustard to get the job done alone.

Ten years ago, I would have said “No way” to bacteria as a causative agent of zombification. Back in my scientific youth, bacteria were thought to attach to the target cells, dump their various toxins, and cause the disease. Now, we are discovering bacteria are much more complex than simple toxin dumpers; they secrete proteins which enter the host cell and modulate host gene expression. What does that mean? It means the bacteria can reprogram normal cellular responses. The bacteria can create host mediated changes that help its survival. Now things are getting interesting, huh? Especially when we add another layer of complexity and consider the effects of a whole population of bacteria, called a microbiome. 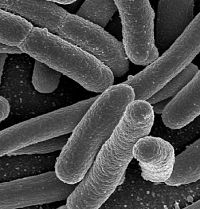 E. coli under the microscope (Wikipedia)

A microbiome is the collection of microorganisms which exist in a particular environment. Part of what we study in the research laboratory where I work in involves study the intestinal microbiota and the interactions these microbes have with the host gut in the prevention of infection with enteric pathogens. It is an intricate system where the microbes modulate the cells of the intestine to benefit both the host and the microorganisms of the gut biome. Frankly, I did not put zombification and microbiome together until I received a research article alert a few weeks ago for an article describing the human death microbiome which the authors called the thanatomicrobiome. The researchers report a characteristic, time-dependent, post-mortem shift of the bacteria in human tissues from a predominantly aerobic (oxygen loving) bacterial population to an anaerobic population (oxygen hating).

Perhaps a single bacterial pathogen may not have the bang to induce zombification, but how about a unique zombie microbiome signature which triggers a transformation in a nearly dead human host to a member of the walking dead? The zombie bite introduces a zombie bacterial microbiome which sit resident in the host until the host faces death and then triggers the transformation from death bed human to walking dead. Sweet, huh?

Parasites are potential contributors to the Zombie Factor. Fungus, yeasts, molds, and worms all have the genomic complexity which could potentially cause such a massive transformation. There are documented cases of parasites affecting host behavior, with many of these discoveries rising from the relatively new field of neuroparasitology. Toxoplasma gondii infection in rats makes them less scared of cats and more likely to be eaten by these cats, where the parasite multiplies and is released in the cat’s feces. 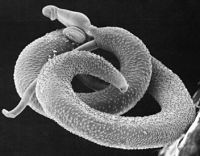 The flatworm, Euhaplorchis californiensis changes its fish host’s behavior to make it easier to be captured and eaten by birds, which are the reproductive host. Perhaps the most exciting example is of the Ophiocordyceps fungus, coined the zombie-ant fungus, infection of ants reported in a Guardian article from 2011. There is even a cool video from ScienceCast about the zombie-ant fungus. As you can see, parasites really begin to reveal a microorganism with the potential to be a cause of zombification and a candidate for the elusive Zombie Factor.

Prions can be another potential Zombie Factor agent. Prions are infectious proteins often described as virus-like particles without any nucleic acid (DNA or RNA). In general, these prion proteins appear to be similar to native host proteins, except with slight conformational changes which cause them to spontaneously aggregate, form crystals and kill host cells. Prion diseases are associated with the degenerative brain disorders, Creutzfeldt – Jakob disease and kuru in humans, Bovine Spongiform Encephalitis (BSE), or “Mad Cow disease, in cattle, Chronic Wasting Disease (CWD) is deer or elk, and Scrapie in sheep.

The degenerative neurological effects of prion-induced, spongiform encephalitis affect brain function and could potentially induce the characteristics of a zombie, wonky motor skills, speech, and eating disorders. The problem with prions is they are slow moving. It may take years for enough prion protein crystals to aggregate to the point of causing brain damage.

Can the Zombie Factor move fast enough, be infectious enough, and (this should be a big AND) spread without some sort of intervention through immunity or vaccination, to actually produce an effective army of the living dead hell-bent on live, healthy, human brain consumption?

Well, it would have to have a high reproduction number, R(0) value, which is a calculation used by epidemiologists to enumerate how many new individuals become infected per one original infected individual. Here’s a recent link explaining the R(0) value for Ebola compared to other viruses.

It would have to be more easily transmittable than through a bite (Rabies, a virus often associated as basis for a zombie virus, is a rare disease with an R(0) value barely over one.) and would have to spread very quickly before containment of those infected.

More things to consider with the Zombie Factor agent.

In a nutshell, although there are some intriguing, existing microbial agents which have some potential to be the infectious Zombie Factor, they all fall short. Zombie populace, the odds are NOT in your favor for a global takeover. It doesn’t matter if you are a classic Voodoo zombie fan (That’s a whole separate blog post on toxins!) or are drawn to the brain-eating side of the zombie fence either by your fear of death or by your fear of infectious disease, keep your walking dead fandom going strong. Keep reading, keep watching, and keep writing. Just keep those awesome zombie stories coming. Please feel free to leave your Zombie Factor origin ideas in the comments.

A last note from Dan: if you want the zombie version of romantic comedy, my agent just published one (yes, literary agents can be writers, too). She writes as Nora Fleischer, and the book is called Zombies in Love. You can read the first chapter free on Amazon.