This article on spawning monsters with biology is part of the Science in Sci-fi, Fact in Fantasy blog series. Each week, we tackle one of the scientific or technological concepts pervasive in sci-fi (space travel, genetic engineering, artificial intelligence, etc.) with input from an expert. Please join the mailing list to be notified every time new content is posted.

Sarah J. Sover holds a BS in Biology with an emphasis in ecology and animal behavior from Georgia Southern University where she graduated as a Bell Honors’ Scholar. She has a background in wildlife rehabilitation and veterinary medicine. Her work was featured in You Want Stories? The Jordancon 2019 Anthology, and her debut novel, a comedic fantasy, released in August 2019. Double-Crossing the Bridge tells the story of a group of grog-chugging trolls pulling the heist of the century, and it’s available here. For more about Sarah J. Sover, visit SarahJSover.com or follow her on Twitter.

Nothing elicits a visceral response like a monster. The combination of familiar elements contrasted with something warped pushes readers into uncertain territory, and speculative fiction authors adore off-balance readers. How else can we shove them through the portal?

But it’s our job as writers in genres that give us latitude to smash through walls and create entirely new universes to keep the readers engaged, no matter how far we stretch their imaginations. By making conscious, biologically sound decisions as we give rise to monsters and worlds, we can protect the willing suspension of disbelief while providing rich, immersive, and unsettling reading experiences that transport readers from the mundane onto another plane. Whether we’re writing monsters that already exist in folklore or creating entirely new species, remaining cognizant of the responses we’re eliciting gives us the power to manipulate and control the reading experience. But generating creatures with no regard to biology can undermine those efforts.

So, let’s discuss some strategies for spawning effective monsters.

One of my favorite books to discuss when writing about monsters in sci-fi and fantasy is the Gentleman Bastards Series by Scott Lynch. His imaginative creatures are all based in sound biology and live in fleshed-out ecosystems, making them believable while trapping the reader in a world of Lynch’s own creation. But his stiletto wasps and devilfish, as fascinating as they are, have nothing on his legions of gentled creatures when it comes to pure terror factor. Something powerful happens in the brain when the familiar feels so wrong. Turning the natural unnatural, altering the mind and behavior of an animal we know so well, is beyond disconcerting. The same can be said for humans who suffer the loss of self, and that’s why once-human monsters such as LeGuin’s Gebbeth, the Other Mother, vampires and the like are so impactful.

Another strategy relies on utilizing familiar traits and twisting or amplifying them. The oldest monsters are frequently based on animals that provided challenges to early civilizations such as bears, wolves, snakes, etc., and these creatures tend to elicit fear. Warping one or two traits even further can push a creature past scary and into comedic territory, especially if behavior is also altered. The Stay Puff Marshmallow Man, the trolls from my fantasy novel Double-Crossing the Bridge, and gremlins are just a few examples. 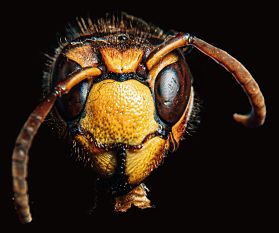 But fear and laughter aren’t the only emotions we seek to trigger as spec fic authors. Some creatures exist just as a part of the world they inhabit. Take the Mollenkampi in Dan Stout’s recent release Titanshade. They’re humanoid with insect-like face mandibles that alter the way they speak and eat. A type-A personality detective devouring a burrito through his neck while simultaneously running down case facts is just plain awesome.

So, the first consideration we should take as writers is the response we’re striving for. Is the creature designed to terrify or delight? To entertain or to give the creeps? To simply exist in the world like a garden gnome or to stand out like Godzilla looming over Tokyo? Whatever its life’s purpose, biology can help achieve the appropriate responses.

When creating monsters, there will always be an unconscious bias toward the familiar, but making purposeful, reasoned choices makes for more effective creatures. Merging traits from disparate species is a common practice and has generated some truly fascinating beasts such as griffons, the questing beast, mermaids, and my personal favorite, Piranhaconda! 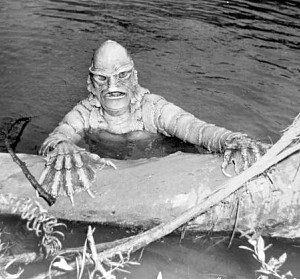 So, we’ve established that familiarity is a tool writers can use to manipulate the reader. Conversely, the farther from humanity a creature is on a taxonomic level, the more alien it can seem. A prime example is the fascination with worms and maggots. They are borderline mundane but very removed from humanity in both physiology and behavior. Put into different contexts, they elicit different responses. Take that commonplace little wriggler and amplify him to gigantic proportions, and you have the sandworms of Dune and Beetlejuice and countless other horrors from across all speculative fiction media. Now, shrink and multiply a worm-like creature and you’ve got Norman Pfister from Buffy, a composite demon comprised entirely of maggots. Ew.

Parasites are about as far from humans as taxonomically possible, but parasitic behavior can be attributed to any creature. Doing so amplifies the creeptastic factor by five quadrillion according to my precise calculations. Now have those parasites take control of humans by entering the ear canal or have a parasitic bacteria turn a human into a zombie, and you can terrify and in some concerning cases, delight.

Even when creating something completely foreign, the reader needs a control, something familiar in order to define and classify the unfamiliar. Michael Crichton’s Andromeda Strain is a highly adaptive microbe with a structure and behavior unlike anything scientifically known. It’s effective at eliciting fear because it’s contrasted with the known. And because it kills with impunity, of course.

Let’s break down the taxonomy of some popular monsters.

*Monster classification is a study unto itself within the horror community, but for our purposes, we’re contrasting monsters against a known biological framework that serves as our connection to the familiar.

**Monsters created by another organism.

Note that the more similar to humanity a creature is, the more relatable it reads while the farther removed, the more alien. Both relatable and removed creatures can affect the reader depending on how they are used in a story. With the power of creation comes the ability to make scientifically sound decisions that reinforce the purposes of the monsters you spawn.

Whether we’re enlarging or merging species, appropriating behaviors of one species and applying it to another, giving life to the inorganic, or using the known to contrast the unknown, every decision we make as authors alters the reader’s perception of our creatures. We can play on primal fear either to amplify or ridicule, place creatures in unexpected situations, or generate something completely new, but even when we’re not writing science fiction, biology should play an important role in the creation process in order for our monsters to take their rightful places within our worlds.