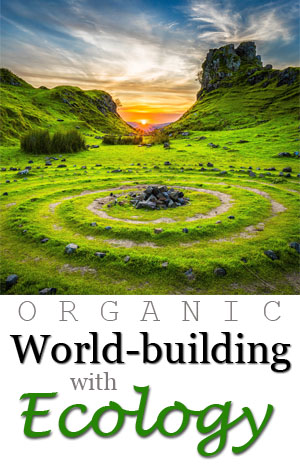 This article on organic world-building is part of the Science in Sci-fi, Fact in Fantasy blog series. Each week, we tackle one of the scientific or technological concepts pervasive in sci-fi (space travel, genetic engineering, artificial intelligence, etc.) with input from an expert. Please join the mailing list to be notified every time new content is posted.

Sarah J. Sover holds a BS in Biology with an emphasis in ecology and animal behavior from Georgia Southern University where she graduated as a Bell Honors’ Scholar. She has a background in wildlife rehabilitation and veterinary medicine. Her work was featured in You Want Stories? The Jordancon 2019 Anthology, and her debut novel, a comedic fantasy, released in August 2019. Double-Crossing the Bridge tells the story of a group of grog-chugging trolls pulling the heist of the century, and it’s available here. For more about Sarah J. Sover, visit SarahJSover.com or follow her on Twitter.

Organic World-Building through Ecology, or How to Eat a Porg

You know, those divisive winged creatures plaguing Luke Skywalker’s island refuge in The Last Jedi. Their features are familiar, if somewhat exaggerated—big eyes, rounded bodies, stubby wings—the features of a puffin. Puffins were so plentiful on Skellig Michael, the island setting that doubles as a wildlife preserve, getting a shot without them dotting the horizon and rocky outcroppings was nearly impossible, so one of the concept designers came up with the brilliant solution to disguise the puffins as a species more suitable for the Star Wars universe—Porgs. And it works!

The various settings of Star Wars are built upon realistic frameworks containing individualized ecosystems, so an indigenous, bird-like species that’s as adapted to the rock island as an Ewok to the forests of Endor or a Tusken Raider to the sands of Tatooine simply makes sense. 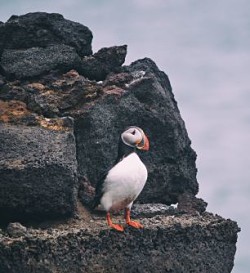 Puffins were the model for Porg

For more on the hatching of these adorable nuisance creatures, go here.

Maintaining the reader’s suspension of disbelief is integral to the success of a story. Had that same designer imagined a creature that made no sense in the habitat, it would have stretched believability and exposed a crack in the world-building. Every species on earth is adapted to its environment, so it’s important to consider those adaptations, even when writing about other earths and universes, if we hope to keep the reader immersed.

George R.R. Martin’s direwolves, for instance, wouldn’t last long roaming sunny Dorne, and placing them there may give the reader pause. But their thick fur, pack mentality, and sizable body mass are well-suited to the cold, northern climate where the reader would expect to encounter such creatures. 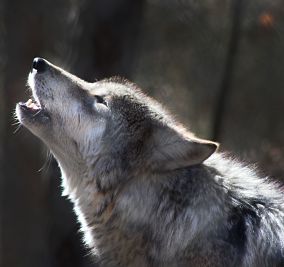 Direwolf. Not found in Dorne.

Another way to pull a reader away from a well-written story is to remove the plot and characters from their environment entirely, treating them as if they exist in a vacuum. Unless you’re writing a story in a laboratory where all variables are manufactured, the world is a messy place filled with nuisances and needs, smells and sounds, cockroaches and puffins. A plot that is untouched by its surroundings is too convenient, and frankly, boring to read. Ecosystems are complex and interconnected, but in order to provide an immersive reading experience, you need those messy ecological elements to be a part of your world-building.

A long-running joke among fantasy writers is that everyone must be constipated because nobody ever stops to relieve themselves. Basic body functions such as eating and breathing are sometimes overlooked in the name of plot progression, but if the reader isn’t immersed in the world, the plot falls flat. That also applies to the ecosystems we inhabit. A journey through a forest is far more believable if there are mosquitoes biting necks, owls calling in the distance, and squirrels scurrying along branches.

Ecology isn’t limited to animal species. It also includes the natural resources that provide the foundations of life, and human societies are formed primarily around meeting those needs. Just like humanity doesn’t exist in an environmental vacuum, societies don’t simply exist as independent entities. They don’t run on currency, rather the resources that currency represents. Fictional societies must operate the same way, to provide for the masses. You may not want to diagram the agricultural and irrigation systems of your world just like you probably don’t want to note every time a character eats a bagel or chugs some blue milk, but neglecting to acknowledge fundamental needs and showing how they shape society makes for abysmal world-building.

By viewing your characters as members of a society existing within an ecosystem, you’ll begin to see how much their surroundings influence their actions, and your plot will feel more organic. Building a cohesive world requires a basic understanding of the character’s place in it. An apex predator behaves differently than a decomposer, and that doesn’t change just because they’re caught up in a major plot-point. Ecology influences animal behavior like air influences breathing—you can’t separate the surroundings from the actions without the break-down of both.

So, how do we create believable worlds that come alive on the page? First answer a few questions:

The answers to these questions can help add depth and realism to your story in ways you may not expect. Besides, when your book gets that bank movie contract, it never hurts to have some adorable, big-eyed creatures lined up to pitch to merchandisers. As for me, I’m off to meet my basic human needs by tearing into some roasted Porg.

Editor’s Note: If you enjoyed this post, check out Sarah’s other article on spawning monsters with real-world biology.