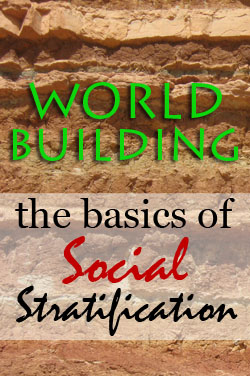 This week’s expert is our first returning guest! Hannah Emery is a sociologist by training (PhD from UC Berkeley last year). Her guest post on developing fantasy cultures remains of the most popular articles in this series. Her professional specialties include culture, education, and identity; she wrote her dissertation on the social construction of identity, looking at how parents choose names for their children. She’s taught courses on sociology, identity, and family.

The Basics of Social Stratification

Modern readers, especially Western readers, are used to reading about unlikely heroes who save the world by triumphing over colossal odds. Think Harry Potter, the scrawny orphan with the abusive relatives; think Vin, the suspicious street kid from Brandon Sanderson’s Mistborn; think Lord of the Rings’s Frodo. This trope has been a part of storytelling around the world for a long time, and with good reason – since most people see themselves as the little guy, everyone likes seeing the little guy win.

The idea of the “self-made” person who achieves their success through their own wits and determination has resonance outside the world of storytelling, especially in American culture. However, if you want your fantasy world to be realistic, you may want to take another look at your hero’s social position.

This distinction between the people with power and the people without is what sociologists call stratification, the same word used in geology to describe layers of rock. Social stratification, unsurprisingly, refers to “layers” of people (like the upper, middle, and lower classes); in the modern world, the divisions between these layers are often invisible or unwritten, but in other times and places they’ve been laid out very clearly. In medieval Europe, whether you were born a member of the royalty, the nobility, the merchant class or the peasant class dictated pretty much everything about your life, and you weren’t likely to leave the class you were born into.

George RR Martin acknowledges this in an interview where he talks about why the movers and shakers of his A Song of Ice and Fire world are all high-born people. Martin wanted his story to reflect the fact that in a real feudal society, a peasant wouldn’t have been able to walk up to a king and say anything she wanted. Except under extraordinary circumstances, she’d never have been able to get near him.

Obviously, the modern world doesn’t have feudal lords (at least, not in the same way), but an individual’s social identities and the conditions of their birth still affect their life chances in substantial ways. In any society, the rulers tend to make rules that favor people like them. This is why the election of President Obama was such a big deal, and why people got excited when Justice Sonia Sotomayor was appointed to the Supreme Court. People believe that leaders who are like them are more likely to make decisions that benefit them – and they’re probably right.

Tribalism is deeply rooted in human nature; drawing lines between “us” and “them,” and doing what we can to better the condition of “us,” has been benefitting people for a very long time (this is why a lot of rhetoric around the benefits of diversity focuses on how it encourages people to develop broader definitions of “us”). So the fact that people in power favor others like themselves over those who are different from them doesn’t make them evil; just human.

All the same, the effects are indisputable. Even in the 21st century, even in places like the United States with its narrative of “the American Dream,” significant upward social mobility (moving from a lower class to a higher one) is still very rare. Most people born into working-class and poor families remain in those classes as adults, far from the seats of power. And depending on what your other social identities are, gaining power and influence can be even more difficult.

So, what do you do if you want your fantasy story to have a realistic power structure, but you don’t want your intrepid hero to start out as the ruler of the world? Well, you’ve got a few options. Let’s look briefly at two of them: different types of power and different types of stratification.

Who holds the power in your society? Okay, now who are they competing with?

Even in the most tyrannical societies, it’s almost impossible for one group or person to control everything. Your society probably has a government, the “state” that sociologist Max Weber identifies as the individual or individuals who “legitimately control the means of violence” – in other words, the ones who have final authority over armies, weapons of mass destruction, city guards and police. But where does that government get their money? Think of the power of “special interests,” and the fight over campaign funding, in modern American politics.

Who holds the moral authority in your society? In medieval Europe, kings and princes were extraordinarily powerful people, but when the Pope spoke, they listened. Do you have magic-users whose special abilities might level the playing field? And what about celebrities? Whether you’re talking about a singer, a military leader, or just someone thrust into the spotlight by circumstances, anyone who has the affection of thousands or millions of followers is in a very powerful position indeed.

The three characters I mentioned at the beginning of this post are all able to take their “hero” positions because of their unique types of power.

If you want your hero to be an underdog instead of just someone with a different kind of power, you’ve got another way to play it. Stratification based on social identities is never simple. Every person has a number of identities — the sociological term for this phenomenon is intersectionality — and while some of those will likely make it easier to wield power, others will not. Some of the characteristics that help define social strata include:

Looking at this list, you can see more clearly how even if your character’s handed a lot of the right cards for power in their society (which, depending on your world, will probably vary from the ones listed above), they could still be an underdog. George RR Martin’s Tyrion Lannister is a wonderful example of this: he’s a brilliant man from one of the most powerful families in Westeros, but many people, including his father, fail to take him seriously or give him the credit he deserves because he also happens to be a dwarf. His sister Cersei wants nothing more than to rule the kingdom, but her gender gets in her way.

So, in short, if you want to tell a story about an underdog, there are a lot of different (and more realistic) ways to do it besides having your peasant girl march into the court and tell off the king. Depending on the norms of your society, there are probably half a hundred ways a character who’s born into the ruling class could still be an “underdog” because some part of them doesn’t match the model of who’s supposed to be holding power – and as we saw with the examples of Harry, Vin and Frodo, there are other ways besides power to bring someone to the center of the world, too (including plain old luck). Consider it a challenge that’ll help you build not only richer worlds, but more creative plots, too!