This article on writing venomous creatures is part of the Science in Sci-fi, Fact in Fantasy blog series. Each week, we tackle one of the scientific or technological concepts pervasive in sci-fi (space travel, genetic engineering, artificial intelligence, etc.) with input from an expert.

Robinne Weiss is an entomologist, educator, and writer. Biology features prominently in many of her sci-fi and fantasy stories. Visit her on WordPress where she blogs about life in rural New Zealand, and where you’ll find links to her published stories. You should follow her on Twitter.

Venoms are protein mixtures used by animals to subdue prey and/or protect themselves from predators. Venom first evolved about 500 million years ago, and has independently evolved many times since. Venom is produced by animals as diverse as snakes, scorpions, spiders, insects, lizards, squid, snails, fish, sea anemones, echinoderms, and even a few mammals.

My first exposure to the use of venom in fiction was probably in the picture book, The Big Brown Bear by George Duplaix (first published in 1944). In the story, a male bear is sent by his wife to get fish for dinner. She warns him not to mess with the bees on the way, but the big brown bear can’t resist honey. After dipping his paw into the hive, the bear is chased to the river where he hides with only his nose sticking out of the water. Of course, his nose is stung, and he returns home with a badly swollen proboscis. The swollen nose betrays his transgression to his wife (who nonetheless forgives him).

Venom isn’t always so realistically portrayed in fiction. The radioactive spider venom that turned Peter Parker into Spider-man was more far-fetched. That’s fine; the point of that story was to be far-fetched. But venom’s delivery and action can be poorly used at times, for the sake of drama. I discussed spider venom in a previous post. Here’s the skinny on a few other venoms you or your characters might have the misfortune to experience.

Of the 1200 species of scorpions worldwide, only about 25 are potentially lethal to humans, and the mortality rate from scorpion stings worldwide is less than a quarter of a percent.

Many scorpions are reluctant to use their costly venom unless it’s absolutely necessary. In fact, a scorpion’s first strike doesn’t contain venom at all–it contains prevenom. Prevenom is specially formulated to cause intense and lasting pain in mammals and paralysis in insects–so one sting is usually enough to subdue its prey and warn its enemies off. If the first sting is ineffective, the scorpion stings again, injecting venom this time. It is only the second sting that is potentially deadly to mammalian enemies.

Most snakes eat small mammals, so it’s no surprise that snake venoms specifically target mammalian biology, and that makes them some of the more dangerous poisonous animals. The World Health Organization estimates there are 2.4 million poisonous snake bites per year, leading to 94,000 to 125,000 deaths and 400,000 amputations or other severe health consequences. The majority of these deaths and severe complications occur in developing countries, where access to medical care is limited. Even so, not every poisonous snake bite leads to poisoning. In 30-50% of bites, the snake injects no venom. 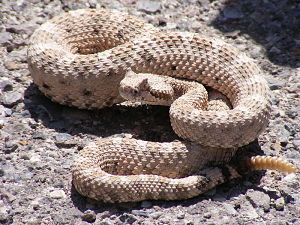 Snake venom toxins fall broadly into three categories: cytotoxins (digestive enzymes that dissolve tissue around the bite site), neurotoxins (proteins that block nerve signals to muscles, causing paralysis and suffocation), and haemotoxins (proteins that either rupture blood cells and cause internal bleeding, or increase clotting and cause blockages in blood vessels, leading to strokes). Each species of venomous snake uses a different mix of these toxins, leading to a wide variety of snake bite symptoms.

Many snake venoms are well-studied, and anti-venom is available for the most common poisonous snakes. Snake venom is also used in medical research, particularly in the design of drugs. Snake venom components have been used in medicine to treat blood pressure, diabetes, and chronic pain, and many other venom-based medicines are under development.

The class Insecta is a veritable pharmacopeia of toxic defensive and offensive compounds. I mentioned some of these in my previous blog post on insects. While some of these compounds are highly toxic, even to humans, most of the insects that employ them don’t inject them into the victim, so they don’t necessarily qualify as venom. But there are venomous insects. The most well-known are the Hymenoptera–bees, wasps and ants.

Hymenopteran venoms aren’t generally deadly to humans–the hymenopterans most people are stung by use their venom solely for defense, so the venom is geared to cause pain, not to kill. Unfortunately, about 3% of people are severely allergic to one or more components of hymenopteran venom. For these highly allergic people, even one sting can cause anaphylaxis and death. In fact, bee and wasp stings kill more people (in the countries for which statistics are available) than snakes and spiders combined. No surprise–nearly everyone gets stung by a bee or wasp, usually many times during their lifetimes, and a lot fewer people are bitten by snakes and spiders.

As in other organisms, hymenopteran venoms vary widely, and different species cause different reactions, even for those allergic to some venom components. I’m a great example of this. For me, honey bee venom is a nuisance, fire ant venom is painful but trivial, yellowjacket venom causes extensive swelling around the sting, and the venom of a small unidentified ant in Panama induces full-scale anaphylaxis. Since we know the chemical composition of few hymenopteran venoms, and we rarely know exactly which components a person is allergic to, it’s difficult to predict how someone will react to a new sting.

Interestingly, some frogs take advantage of ant venom. They appear to not only be immune to the venom, but are able to incorporate venom from ants they have eaten into their skin, rendering themselves poisonous. The famous ‘poison dart frogs’, used by indigenous tribes in Central and South America to poison hunting spears, appear to get their poison in this way.

Less commonly known venomous insects include a number of caterpillars with what are known as urticating hairs. Urticating hairs are hollow spines filled with venom. When a potential predator or incautious human brushes the spines, they pierce the skin, then break, releasing venom. Most caterpillar venoms cause intense pain and itching, but some are more dangerous. A group of South American caterpillars in the genus Lonomia can cause internal hemorrhaging, sometimes leading to renal failure and death. Other caterpillar venoms can cause necrosis of the skin.

Another less well-known group of venomous insects are several groups of predaceous true bugs. Assassin bugs, giant water bugs, water scorpions, creeping water bugs, and backswimmers feed on other insects (or small vertebrates like fish and frogs, in the case of the giant water bug). They kill their prey by injecting venomous saliva with their sharp mouthparts. They also inject venom in self-defense, and their bites can be quite painful.

Centipedes are predators, and they subdue their prey with venom injected by poison jaws on the first body segment behind the head. Small centipedes are harmless to humans, but larger species can deliver a painful bite. Possibly the most dangerous centipede is Scolopendra heros, which can grow to 30 cm long. Its venom contains a toxin that targets the vertebrate nervous system, allowing it to subdue toads, frogs, lizards and mice in addition to its invertebrate prey. Fortunately, humans are too large to be killed by a centipede.

Fish venom is perhaps the most diverse group of venoms in the animal kingdom. Venom evolved separately as many as eighteen times in fish. Almost all fish venoms are defensive in nature, so they primarily cause pain. They also all affect the cardiovascular system, often by lowering blood pressure, which could debilitate a predator, and potentially kill a swimmer.

One particularly promising fish venom kills by causing cells to enter into apoptosis–programmed cell death. When tested on cancer cells, it kills or incapacitates the cells so they stop dividing regularly. Researchers are now trying to isolate the particular compounds in the venom that cause cell death.

Marine cone snails shoot darts poisoned with neurotoxins into unsuspecting fish. The toxins are so potent, they can paralyze the fish within 50 milliseconds. The snail then swallows the fish whole.

There’s a venomous octopus somewhere in there. I know. Scary. (Wikipedia)

Cone snails are potentially dangerous to divers and shell collectors. The sting is not particularly painful, but it may cause paralysis and respiratory failure.

All octopuses, cuttlefish and some squid use venom to kill their prey. Only one species, the blue-ringed octopus from Australia is dangerous to humans. It’s venom contains a powerful neurotoxin that can cause respiratory failure within minutes of a bite. But don’t worry–it doesn’t want to bite people, and only three deaths have been attributed to the blue-ringed octopus. When it feels threatened, it flashes bright blue rings over its body as a warning. 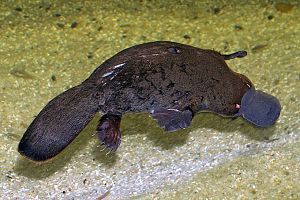 Look out for the Platypus (Wikipedia)

Venomous mammals are rare. Three species of shrew and two species of solenodons are known to produce neurotoxins in their saliva in order to paralyze prey. Male platypuses have venom spurs on their hind legs that activate during the mating season. The proteins in platypus venom appear to target mammals, and the spurs are used largely in territorial fighting against other platypuses. Platypus venom can kill rabbits and dogs, and in humans it causes intense, long-lasting pain unaffected by painkillers like morphine.

Slow lorises are the only venomous primates. They have a unique two-part venom in which venom must be activated by enzymes in the lorises’ saliva. Potentially lethal to other slow lorises, in humans, slow loris venom usually has little effect, but it can induce anaphylaxis with a protein similar to a common cat allergen.