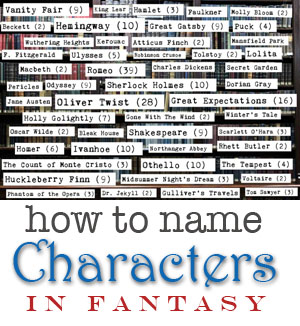 This article on naming characters in fantasy is part of the Science in Sci-fi, Fact in Fantasy blog series. Each week, we tackle one of the cultural, historical, or world-building aspects of fantasy with input from an expert. Please join the mailing list to be notified every time new content is posted.

This week’s expert is Hannah Emery, who has a PhD in sociology from UC Berkeley. She wrote her dissertation on the social construction of identity, looking at how parents choose names for their children. She’s taught courses on sociology, identity, and family. Though a sociologist by training, she has pivoted to community-building work for families in my local area and working to connect kids and families with nature. She also works as a baby name consultant.

Hannah was one of the first expert contributors to the Fact in Fantasy blog series; guest posts on writing realistic magic academies and developing fantasy cultures remain some of the most popular articles.

How to Name Characters in Fantasy

Quick: what are the things you need to settle before you start writing your novel?

You know what those characters will have in common? They’ll all need names.

Most of us have named someone in our adult life: a pet, a car, maybe even a child or two. Naming characters is different – the base assumptions, the considerations, the ‘rules’ – but not as different as you’d think, either. Some of the guidelines are the same no matter what. Whether you’re naming your new baby, your new puppy, or your new protagonist, you’ll need to think about how distinctive you want the name to be, what assumptions the name will give to people who hear it, and what cultural rules underlie the choice you’re making.

When choosing names for characters specifically, there are a few guidelines it’s usually wise to keep in mind:

On that note, let’s dig into the worldbuilding aspects of naming a little. There are two elements here, and they’re tangled together because of the unique place names straddle in society: cultural expectations, and language rules.

Even if you’re not dedicated to Ursula LeGuin-level anthropological worldbuilding, if you want solid, realistic-sounding names for the characters in your story, you’d be wise to do a little bit of thinking about where names come from in your characters’ home cultures.

A few questions to get you started:

As far as straight-up linguistics goes, you don’t need to develop a full grammar and dictionary for your fantasy language to name your characters, but thinking a bit about the relationship between names and language might save you a headache later on. The basics:

Like any other part of worldbuilding, the amount of effort you put into naming characters is up to you. But if you’re looking to flesh out some details, names give you a great excuse to consider everything from family relationships (whose ‘family name’ or names do the children get?) to social positions (what’s a ‘low-class’ or ‘high-class’ name in your society?) to mythology and the things your culture values the most (just for a start, boys’ and girls’ names tend to have very different lexical meanings). They’re one of the very few completely invented cultural items that almost all humans receive, usually early on, and that most keep for their whole life (just thinking about the exceptions to each of those situations can create story ideas!).

Names are culture filtered through language. You can’t get much more key to worldbuilding than that.