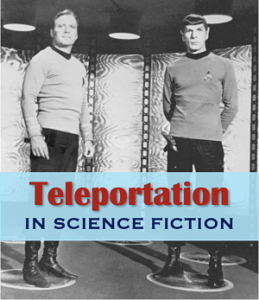 If you’ve read the earlier articles in this series about quantum retcons, the multiverse, and time travel, it might seem that teleportation is probably not such a big deal. And in fact, quantum teleportation is a very real physics phenomenon. Unfortunately, it isn’t exactly what it sounds like to most of us.

The term quantum teleportation is used to describe the instantaneous transfer of information, not matter. While this might seem like no big deal to you (after all, the technology we use to transmit information these days feels pretty instantaneous), it’s actually huge, physically-speaking.

Quantum teleportation breaks the speed limit of the universe. Information transfer is generally done using the fastest-moving particle in the universe: the photon. Photons are the particles that transmit electromagnetic fields—like light and radio waves—and they move at, well, the speed of light. General relativity—one of the most robust theories in history, whose wildest claims have been verified again and again—insists that nothing can move faster than the speed of light.

What this means, practically speaking, is that if you measure one of the particles, you automatically know the what the outcome of that measurement would be on the other particle, without actually measuring it. And because of the observer phenomenon in quantum mechanics (see the article about quantum retcons for this), what this actually means is that measuring the state of one particle instantaneously determines the state of the other particle, no matter where in the universe it is located. This means information is transmitted faster than the speed of light.

So if you want to teleport a person, it’s not as simple as transferring all the components of their body and reassembling them in a new location, because if you want to use quantum teleportation, you need to have all the pieces (a giant collection of atoms) already in the location where you want the person to arrive. Let’s say you have the technology to do this—to somehow gather up all the particles you would need from the surrounding environment and entangle them with the atoms that make up the person you are teleporting—and you manage to assemble those atoms into the right form and transfer the information via quantum teleportation… what do you do with the original body?

The cost of multiple copies

In 2006 film The Prestige, this question is tackled with a particularly grimdark spin. If you haven’t seen the The Prestige, I recommend you go watch it and then come back to this article. If you choose not to, then be forewarned: there are spoilers ahead. 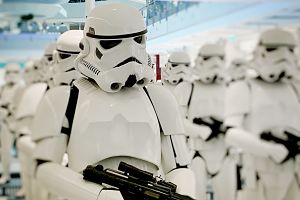 Clones. Not always a good thing.

In the rivalry between two magicians, one is driven to desperate measures. He asks Nikola Tesla to create a machine that can teleport him from one location to another. At first, it seems Tesla has failed, but then they discover that Tesla has been teleporting the test objects (top hats at first, and then a cat) in a quantum fashion, generating hundreds of copies.

When the magician uses the teleporter on himself, a perfect copy is made. A copy that he promptly kills.

Wide-scale use of quantum teleportation on people would either fill the universe with quantum clones, expanding the population (and levels of confusion) at a shocking rate, or normalize murder to a degree that I really hope we would not be comfortable with.

So quantum teleportation of people would be extremely difficult to achieve, and even once achieved would be abhorrent in practice.

Beam me up, Scotty! (source: Wikipedia)

One way around this is to say that the speed of light is fast enough, thank you very much, and to convert matter into energy in the form of light. This sounds a lot more like Scotty’s teleporter from Star Trek, but it, too, comes with issues, both logistical and philosophical.

The logistical issues of turning someone to light would be huge (not to mention there’s no guarantee that they’d return assembled in the correct shape). The kinds of particles that make up the human body can’t all be easily swapped for light particles (photons). For example, electrons, which exist in every atom in your body, have an electric charge, but photons do not. Electrons can interact with positrons to create a photon, and under certain conditions you can convert an electron to a positron, but balancing electrical charge is the least of our worries. The complicated forces and interactions that you would have to balance in order to convert a body to light—rather than just, say, blowing it up, which would be unhelpful—are numerous.

But once you’ve moved past the logistical, there are some interesting implications. In Kameron Hurley’s The Light Brigade, soldiers are turned into light in order to travel quickly from Earth to the combat theater on Mars. Light does not experience time, because of the way time and distance are related and because light travels at the fastest possible speed in the universe. We’re moving slightly away from quantum mechanics here, and into relativity, but as photons are both quantum and relativistic, I’ll allow it. Being turned into light this way would make the experience of time lose all meaning. There would be no order of events, no causality. Hurley explores this, as the protagonist of The Light Brigade starts to experience time out of order.

The real value of quantum teleportation

Since transporting information is not actually very helpful at beaming people up, it’s worth asking what it is good for. This instantaneous information transfer, along with other very handy quantum properties like superposition, are going to revolutionize a totally different area of science—one not often explored by science fiction: computing.

Quantum computers take advantage of superposition to massively speed up operations. Classical computers like the one I used to write this article use binary circuits: they perform operations on bits, which can be either 0 or 1. Quantum computers, on the other hand, perform operations on qubits, which use superposition and therefore can be in any of an infinite number of states (not just 0 or 1). This makes quantum computers extremely good at solving the kinds of problems classical computers struggle with, and could help revolutionize many fields, including materials science, energy generation and storage, and predictive modeling.

And quantum teleportation performs a very different role in computing: using entanglement, you can create unbreakable encryption. The implications of this for society are huge, for monetary policy and communication and spy work and just about anything else that relies on privacy.

Quantum teleportation gives us the chance to communicate faster than light (handy if you’re living in an interstellar civilization), to create unbreakable encryption, and to use computers to uncover the knowledge of the universe in unprecedented ways. It may not be able to transport you from Earth up to your spaceship in the blink of an eye, but it’s still an extremely powerful technology.

In the end, remember that you’re still writing speculative fiction

Part of the fun of speculative fiction is that the science is not accurate. It’s speculation—taking a grain of real science and expanding it, changing it, exploring it. Just do enough research beforehand to make sure you’re able to talk about the concepts with a little knowledge. And remember that humor is a great way to diffuse concerns about the science in your writing and remind us that we’re not reading a textbook: we’re reading science fiction.