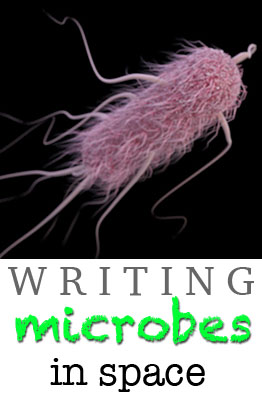 This article on microbes in space is part of the Science in Sci-fi, Fact in Fantasy blog series. Each week, we tackle one of the scientific or technological concepts pervasive in sci-fi (space travel, genetic engineering, artificial intelligence, etc.) with input from an expert. Please join the mailing list to be notified every time new content is posted.

Today’s article is a returning guest post from microbiologist Mike Hays, who already wowed us with articles on the science of Jurassic Park, zombie microbiology, and gene editing. He’s from Kansas, a tried and true flat-lander by birth.

He has worked as a molecular microbiologist for over 25 years, has coached high school sports, and is a middle grade author. Go follow him on Twitter.

In space, no one can hear you scream…

Do you remember that tagline? 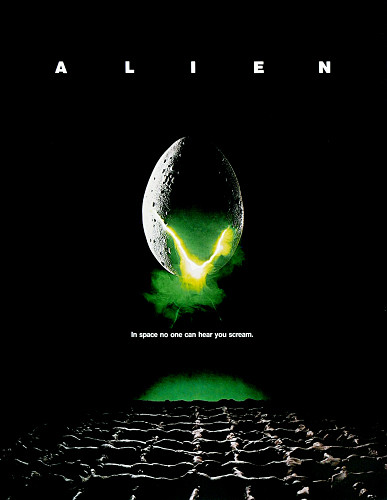 What a surprisingly scary movie that was. I went to see this back in the day without any real idea or preconceptions about the movie. We were bored. We were looking for something to do. We went to a movie. The perfect mix to stumble into a science fiction/horror classic that sticks to your psyche throughout life.

Want to hear something almost as scary? Recent research on bacterial behavior in the microgravity of space may make one want to scream—whether anyone can hear you or not. Many of these research findings harken back to another creative work that successfully runs a science-thriller chill down my spine, Michael Crichton’s 1969 debut work, THE ANDROMEDA STRAIN. In the book, the Project Wildfire team assigned to identify and contain the alien agent describes three possible origins for alien pathogens on earth.

What are we learning about bacteria in space that makes the hair stand up on the back on my neck? We are discovering that Project Wildfire’s conclusion #3 actually happens in real life. Research done in parallel on the International Space Station and on Earth shows bacteria can change in microgravity. And with these changes, bacteria have the potential to become more virulent. These changes, and their inherent possibility for an increased virulence in space, result in a whole new level of problem for the space traveler and the one-hundred-trillion or so bacteria cells they carry with them on the trip.

We live in a symbiotic relationship with our microbiota. We benefit from them, they benefit from us. We’ve come to an evolutionary understanding. It works well, don’t you think? In fact, it is currently believed that only around 1% of the total known species of microbes are actually pathogens to human. Pretty good odds, right? What happens if those odds shift in microgravity and even a small portion of the 97% of microbes we are symbiotically adapted to change?

It reminds me of one of my all-time favorite Michael Crichton lines, this one by mathematician Ian Malcolm in JURASSIC PARK. “Life breaks free. Life expands to new territories. Painfully, perhaps even dangerously. But life finds a way.”

Spacecraft can be reservoirs for potentially dangerous bacteria. Using next-generation sequencing methods instead of the limited available culturing methodologies, scientists found evidence of 377 separate strains of 65 microbial species on the Curiosity rover after all decontamination efforts as outlined by NASA were completed. When they attempted to grow the 377 strains under conditions which mimicked the harsh Martian surface, they were able to grow about 11% of these strains.

Studies done on the air and water filtration systems of the International Space Station revealed a host of potential opportunistic microbes. These microbes are brought to the ISS on the bodies of the astronauts and are sloughed off with skin particles, hair, etc. With an immune system that becomes compromised in microgravity, this can lead to problems for the astronauts themselves from opportunistic pathogens in the water and air systems.

Also, as we’ll highlight below, microbes can change in space. This gives the potential for these microbes on the ISS or on other long-term space missions to create problems during the mission and/or when these contaminants to return to Earth.

An organism can change through an alteration of its genotype or its phenotype. A genotype is the code written in its DNA. It is fixed and inheritable and can be altered only through a genetic mutation, recombination, or extraneous DNA uptake. A phenotype is the way a genotype is expressed within an environment. Recent studies have shown alarming data about how the phenotype of some microbes interact with the microgravity environments of space.

In a study done on Salmonella during Space Shuttle missions between 2006-2008, the pathogen exhibited an increased virulence grown in space. Microgravity Salmonella were found to be more resistant to acidic, osmotic, and thermal environmental stressors and showed an increased survival rate in macrophages, a type of white blood cell that engulfs and destroys microbes and other foreign substances in the host. That’s pretty scary!

But that is not all. In the microgravity Salmonella study group, there were global changes in gene expression with a change in 167 gene transcripts and 73 proteins. The surprising thing is that these gene expression changes were associated with only a single global transcription regulator.

Finally, there was an observed increase in the accumulation of Salmonella in the extracellular matrix consistent with biofilm formation. (Biofilm formation tips the balance of power in a pathogen’s favor. This quorum sensing property triggers an up-regulation of certain genes once the biofilm has reached a critical mass with the activated genes becoming vital to the bacteria’s survival as a community and not just as individual bacteria. In short, bacteria in a biofilm develop a mob mentality.)

In studies with the genus Bacillus, of which the causative agent of anthrax, Bacillus anthracis, is a member, researchers simulated the radioactive, dry conditions of the Mars surface in the laboratory. They introduced Bacillus to this extreme environment and found the bacteria were able to adapt. The bacteria survived even in these most harsh of conditions! And because Bacillus can form protective spores that basically put the cell into a state of suspended animation, the researchers believe the bacteria could survive a lengthy trip to the red planet.

Recently, a research team published a study done on the International Space Station that was similar to the work done previously on Salmonella, except using a antibiotic sensitive strain of E. coli as the study organism. The group observed phenotypic changes between the E. coli grown in space and the same strain grown on earth. They observed a 13-fold increase in final cell count in space, meaning the bacteria grew faster and denser than on earth.

The space cultivated E. coli developed resistance to normally inhibitory levels of the antibiotic, gentamicin sulfate. The E. coli strain became antibiotic resistant in microgravity! Perhaps this is due to the change in morphology of the E. coli cells, which exhibited an almost 40% reduction in cell volume and an increase between 25-43% in cell envelope thickness. This thickening and change in morphology may cause the antibiotic resistance by messing with the ability of molecules to move in and out of the cell. Gentamicin acts by entering the bacterial cell and shutting down protein synthesis, thus killing the cell. If the antibiotic can’t enter the cell, it can’t kill it.

Outer membrane vesicles were observed in the space-grown liquid cultures of E. coli. This led to a tendency to aggregate into clumps of cells and not grow evenly distributed like liquid cultures on Earth. This clumping behavior may be a sign of the potential for E. coli in microgravity to form biofilms.

Microbes in Space: Not All Bad

The news about microbes in space is not all bad, though. Microbes can be used for good. They can be used as bioreactors or bioremediators on board during extended stays in space or proposed long-range flights. Microbes can perhaps become mini-factories to produce needed products without taking up precious square footage or adding weight to the payload.

Synthetic biological approaches and resource utilization using microbes may be a solution to many logistical problems of long-term space travel. Microbes can be harnessed to make medicines, biofuels, and raw polymers for 3D printing fabrication or other materials needed for the flight.

Plus, just like on earth, the bacteria we carry around inside and outside our bodies are generally our friends. We need them and they need us. It’s an almost perfect symbiosis which will more than likely find a way to continue as such, even in space.

SFF writers, when our awareness and knowledge of new scientific discoveries grows, we’re gathering “OUCH”-tools for our own writer’s toolbox. The more “OUCH”-tools we have at our disposal, the more obstacles we’re able to throw in front of our characters to prevent them from easily reaching their story goals. More misery for our characters, especially misery from novel and unexpected sources like microbes that change in space, the higher the dramatic tension in our stories. Thank you, science!

Where do I hide, Ripley?

Should we be scared? Should we be avoiding space activities because of the potential dangers from microbes?

We do need to be fully aware of these potential dangers, though. The positive and negative behavior of microbes in microgravity needs to be included in the multitude of variables considered when planning space flights. We need to increase the scope of the research to further recognize the importance of microbes in space activities. We will need to identify “acceptable burdens” and limits as these bacteria change in microgravity.

In space, maybe no one can hear us scream. But we can learn to identify potential problems from “alien” microbes. Learn as much as we can so we don’t fly blindly in and expose ourselves to these risks as we explore our solar system. We should do the work and make the changes necessary to ensure the health of our space travelers and the billions of friends who ride along with them.

And maybe along the way, we can use some of what we learn about microbial behavior in space for another good…good fiction! Because, as Crichton wrote, “Life finds a way.”