This article on writing realistic soldiers is part of the Science in Sci-fi, Fact in Fantasy blog series. Each week, we tackle one of the scientific or technological concepts pervasive in sci-fi (space travel, genetic engineering, artificial intelligence, etc.) with input from an expert. Please join the mailing list to be notified every time new content is posted.

Michael Mammay graduated from the United States Military Academy and served as an Army officer for 27 years. He holds a masters degree in military history is a veteran of Desert Storm, Somalia, and the wars in Iraq and Afghanistan. In his spare time he writes science fiction and fantasy, usually with military influences. He is the author of two books published by Harper Voyager: Planetside (July 2018) and Spaceside (August 2019). You should follow him on Twitter.

I write about soldiers. Sure, I write about other things, too…mystery and science fiction and scheming…but soldiers are at the center of it. I spent 27 years in the army before I ever had a book published, so soldiers are pretty important to me. Here are some of the things you might want to think about if you’re putting soldiers in your books. I’m going to be somewhat generic, because I think these things are universal, whether you’re writing fantasy, sci-fi, or any other genre.

I don’t care how regimented your force is or how oppressive the leadership. Unless you’ve got clone troops or robots, soldiers still have individual personalities. In a really rigid force (say, one where minor infractions are punished by imprisonment or death) soldiers might keep down the outer trappings of their personalities, but they still have them. They find different things funny, they like different things, and they have different dreams. Some are happy to be there. Some are just serving because they don’t have a better option.

A military doesn’t just spring up from nothing—that’s an obvious enough concept. But it’s important to know how your force came into being. Is it conscripted or volunteer? Where do the soldiers come from? If it’s a big military, chances are that soldiers are coming from across a wide area. Is that entire area culturally homogenous?

Probably not. Even in a rigid culture, there will be differences between people from the city and rural areas, different levels of education, and different views of the world. How do they see each other? How do their differences interact?

3. Soldiers aren’t all on time and they don’t all love working out.

They don’t *all* do anything. This is similar to number one, but I’ve seen this so many times on TV and in books I had to mention it this way, too. I don’t like getting up early. Hate it. I spent 27 years in the army, and I got up early. But only because I had to. When I was on vacation, I slept in. I’m not the only one. There isn’t some miraculous distribution of early birds in the army. Yes, soldiers are trained to get up early. Some of them will grow accustomed to it and keep doing it. Some won’t.

This is probably the one that will make me quit on a story fastest when the author gets it wrong. I quit on Supergirl because of it. I remember the episode. There was a four-star general, and he was so rigid in his thinking that he couldn’t allow for any variables. I’m sorry…that’s impossible.

To get to that high a position, the man led countless organizations consisting of thousands of people through all kinds of changing situations, and he was successful. If not, he wouldn’t be there at the highest possible rank. So in all that time, he didn’t develop at least some level of flexible thinking? Again…impossible. And while there is a certain amount of ‘just following orders,’ even then, a soldier still has *thoughts* about those orders.

Granted, you can build a military for a totalitarian society where there’s less free will, and some of that will bleed into your force. That’s the thing…soldiers are a product of the society from which they come. The military will try, to some extent, to change some of that. But they’ll only be partially successful. Especially in a free society, soldiers will think for themselves, for good or ill.

Obviously, there are different levels of intelligence in any group of individuals. Soldiers are individuals. Some of them barely passed the entrance test. Some have genius level IQs. Most are somewhere in between.

This one doesn’t bother me when I see it, but it does make me laugh. I think somehow people have this idea of soldiers as rule followers. But think that through. A military force is primarily comprised of young people. Think about yourself at 19, and how well you did what you were told. Now add explosives and guns. But wait, you say…if they get caught breaking the rules, they’ll get in trouble! So…you never sped while you were driving as a teenager? Never drank when you were underage?

Young people don’t plan on getting caught…there’s a level of invincibility in their thought processes. If anything, that’s stronger in soldiers. After all, they’re trained to think they’re not going to die. I remember one deployment where someone higher up than me enacted the ill-fated order that soldiers were not to have sex while deployed. So I’m sure none of the thousands of eighteen to twenty-one-year-olds ever did, because that would be breaking the rules.

But of course they did. A couple was caught literally having sex in a dumpster. Soldiers are nothing if not expedient. Or, if you’re an optimist, love will find a way.

I worked for a general once who was fond of saying that if you leave ten soldiers in a room with an anvil and come back in fifteen minutes, it will either be missing or broken. It’s not a malicious thing. It’s a combination of youth, boredom, and curiosity. What will happen if we put the auto-injector up against a piece of cardboard? What will happen if we shoot one of our own guys in the chest with a 40mm sponge round?

Non-lethal weapon? That sounds like a challenge! I bet you don’t dare to get Tased.

Just in case any military officials are reading this section, please remember that I’m a fiction writer. These are merely hypothetical situations that sprung from my own imagination. As far as you can prove.

A vendor once brought a computer to me that he was diligently trying to sell to the military. I was a young officer at the time, so I had no say in the matter, but for whatever reason, he wanted to convince me. As part of his pitch, he said it was soldier-proof. It was a nice enough computer for the nineties…I’ll give him that. But when he said soldier-proof, I dug in.

“Can you hit it with a big hammer?”

“What if you tossed it across the room and someone didn’t quite catch it?”

All I’m saying is that if you’re going to advertise something as soldier-proof, you better bring your A game.

7. Soldiers do a lot of different jobs.

Not everyone carries a rifle every day. There are cooks, pay specialists, truck drivers, mechanics, supply techs, fuel handlers, explosives experts, chaplain’s assistants, military police, and a thousand other jobs. They have varying skills, accordingly. Not every soldier has every skill. A computer tech might be nearly useless with a rifle. Sure, they’ve had training, and they probably carry one around with them. But make no mistake, nobody wants them to use it (Note, this is a generalization. Some computer techs can also shoot. But really, nobody cares, as long as they can make hot computer magic).

8. In the end, despite everything I’ve said, the main purpose of soldiers is to kill people and break things.

They are often trained and behave accordingly. Sometimes, when you see them all shined up in a parade, you might forget that. But that’s a front. They get in fights…with outsiders, with people from other units, with each other. They swear a lot. Not all of them. Again…individuals. But more than average. I’d have some serious questions about a G-rated war story.

Soldiers are amazing. They do things you never thought people could do in both good ways and bad. They are absurd. I once found a group of my soldiers playing video games after eight hours out on patrol in Iraq. They were playing Call of Duty. You can’t make that up.

Editor’s note: if you liked this, I encourage you to check out Mike’s previous posts: 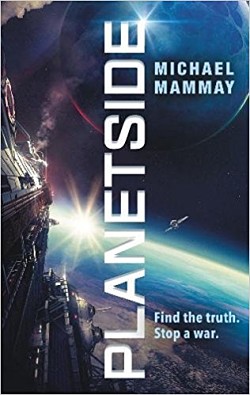 A seasoned military officer uncovers a deadly conspiracy on a distant, war-torn planet…

War heroes aren’t usually called out of semi-retirement and sent to the far reaches of the galaxy for a routine investigation. So when Colonel Carl Butler answers the call from an old and powerful friend, he knows it’s something big—and he’s not being told the whole story. A high councilor’s son has gone MIA out of Cappa Base, the space station orbiting a battle-ravaged planet. The young lieutenant had been wounded and evacuated—but there’s no record of him having ever arrived at hospital command.

The colonel quickly finds Cappa Base to be a labyrinth of dead ends and sabotage: the hospital commander stonewalls him, the Special Ops leader won’t come off the planet, witnesses go missing, radar data disappears, and that’s before he encounters the alien enemy. Butler has no choice but to drop down onto a hostile planet—because someone is using the war zone as a cover. The answers are there—Butler just has to make it back alive…

Following his mission on Cappa, Colonel Carl Butler returns to a mixed reception. To some he is a do-or-die war hero. To the other half of the galaxy he’s a pariah. Forced into retirement, he has resettled on Talca Four where he’s now Deputy VP of Corporate Security, protecting a high-tech military company on the corporate battlefield—at least, that’s what the job description says. Really, he’s just there to impress clients and investors. It’s all relatively low risk—until he’s entrusted with new orders. A breach of a competitor’s computer network has Butler’s superiors feeling every bit as vulnerable. They need Butler to find who did it, how, and why no one’s taken credit for the ingenious attack.

As accustomed as Butler is to the reality of wargames—virtual and otherwise—this one screams something louder than a simple hack. Because no sooner does he start digging when his first contact is murdered, the death somehow kept secret from the media. As a prime suspect, he can’t shake the sensation he’s being watched…or finally succumbing to the stress of his past. Paranoid delusion or dangerous reality, Butler might be onto something much deeper than anyone imagined. But that’s where Butler thrives… If he hasn’t signed his own death warrant.