2022 was a strange year in many ways. As it wraps up, I wanted to look back at the things I wrote and edited, as well as some big-picture observations about the publishing industry.

Somehow, through the quirks and long timetables that seem to pervade publishing, I ended up with three books coming out this year.

Take your worldbuilding to the next level

The first of these was Putting the Fact in Fantasy, a nonfiction book for writers based on the fantasy side of my Science in Sci-fi, Fact in Fantasy blog series. You might recall that the forerunner title, Putting the Science in Fiction, was published by Writer’s Digest Books in 2018. Sometime after that — and definitely not because of it — the parent company of WD (F+W Media) went bankrupt and sold WD Books to Penguin Random House.

In the meantime, PSIF continued to sell well, so we proposed and sold the fantasy companion to PRH back in 2020. Then I began the process of putting it together, which included recruiting several chapters from diverse contributors which would be unique to the book. The book came together nicely, and when it was published in April 2022, I was immensely proud of the resource my contributors and PRH had created. (This is the awkward part where I tell you it’s eligible for certain awards, e.g. “Best Related Work”). The best part about Putting the Fact in Fantasy is that as the editor, I learned as much about fantasy subjects as anyone else. See my blog post for some of the highlights. 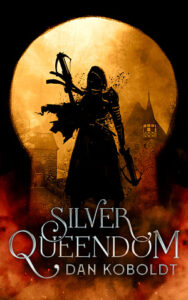 Ocean’s Eleven in a fantasy world

In the meantime, another book was developing in the background. Several years ago I started working on a new project. An epic heist fantasy. The main characters were a group of misfits — a lifelong thief, a grifter fallen from grace, a rough-around-the-edges alemaker, and a gentle giant who knows how to hit things. Individually, they’re each kind of a mess, but together they’re the best team of con artists in their part of the world.

That world is a pre-industrial society where touching silver and other coinage metals gives rare people the ability to use magic. Of course, such abilities are reviled in the Old Queendom where our protagonists operate, but that doesn’t stop them. It gives special meaning to the phrase money is power. Silver Queendom is my newest foray into epic fantasy and hopefully the start of a new series.

Angry Robot Books published the book in August and did a spectacular job with it. The cover is amazing, and the physical book itself is a thing of beauty (they even did the silver foil lettering, which looks incredible). 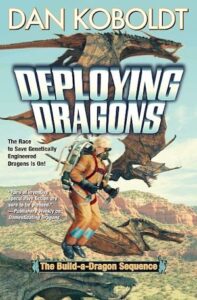 Believe it or not, at the start of this year I was finishing yet another book. I’d truly enjoyed the experience of working with Baen Books on Domesticating Dragons — which will have its one-year anniversary next week — and so I pitched them another book in the same world. In this story, the goal wasn’t to design dragons for sale as pets, but to develop them as weapons for the U.S. military.

Since it was set in the same world, we had to come up with a series name. I floated a few options, and Toni from Baen liked The Build-A-Dragon Sequence (the dual meaning was not lost on her). So we made that the series name. In August, Baen published Deploying Dragons, the second book in that series. Dave Seely was the cover artist once again, and he captured an incredible scene from the book featuring Simon Redwood, the fictional crazy inventor who hatched the first dragons.

I can’t say enough how much I’ve enjoyed working with Baen. They truly are the experts of science fiction; just watch the recent video Q&A with Jim Minz and Toni Weisskopf and you’ll see it for yourself. I’ve learned so much from them over the past couple of years. Beyond that, I’ve had the pleasure of getting to know the staff and authors who work with Baen. It’s like a tight-knit family. Seriously, they send Christmas cards.

With the publication of DD2, I had total of eight books out in the world. Three books in a single year is something I never imagined would be possible. Even so, I’m a little relieved it’s behind me. Also, I’ve promised my friends, family, and favorite book reviewers that I’ll leave them in peace for a while.

I also wrote about two dozen blog posts. Many of them were guest posts in the Science in Sci-fi, Fact in Fantasy series, including these gems:

… and I have even more planned for next year, so please check back here for updates.

Notes and News on the Publishing Industry

A few other things happened this year that really affected me and how I see the publishing industry. First, I went to ChiCon 2022. It was my first Worldcon and I had an amazing time. It was also my first opportunity to see authors at all levels in one place. Most of the authors I know or had the pleasure of meeting were there as professionals. If they did panels or book signings, it drew a dozen or two dozen people. For my book signing, I autographed fifteen books and was thrilled.

Yet there are also a handful of authors — people like John Scalzi, Mary Robinette Kowal, and Seanan McGuire — who drew massive crowds to every event. Hundreds of people lined up to get autographs. Which is great for them, kudos and everything. At the same time, it’s a shame there’s such a feast-or-famine dichotomy to author fandoms. It’s deserved, certainly. Those three names dropped above have built very successful careers over several books. But I wish some of the hundreds of people in the one line would stop by the other tables, you know?

Second, I followed the PRH-S&S merger trial as it seemed like so many people in publishing did. It sure offered some tantalizing revelations about the upper tier of the industry. Honestly, I’m not sure it reflected well on the players involved. It’s clear that they throw huge amounts of money at their big-name bestsellers, all while admitting that they don’t really offer as much support to other authors. Nor do they understand what makes one book succeed when others do not (“Success is random”). Which I find a little disconcerting, honestly.

Third, and most impactful for me personally, was losing my agent a few months ago when he left the business. It was heartbreaking, especially after we’d worked so well together for so many years. I get it, I understand — he’s hardly the only person to leave this tough industry this year — but it left me feeling a bit rudderless.

So that was 2022. A long year, a lot of success, and also a lot to think about. How was this year for you? Drop a comment or shoot me a message. I really want to know.